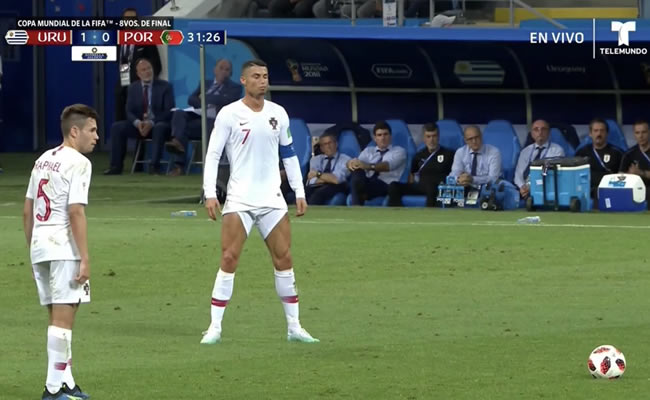 Cristiano Ronaldo is one of the best players in the world, sure. But he is also one of the most divisive… in terms of likability anyway.

He might be good, but he’s also a bit of prima donna…

So, when he pulled up his shorts all weird like before taking a free kick (that went straight into the wall) as Portugal were tussling for a spot in the quarterfinals, of course the internet had questions… and suggestions.

To be fair to him, he does this sort of thing quite often. But it’s a bit more noticeable when the pressure is on. And Black Twitter had the following questions as well mas answers……

When Ronaldo pulls up his shorts and starts flexing his thighs before a freekick while being down a goal in a elimination game. pic.twitter.com/irIpk3e4ta

Free kick just outside the box.

Tbh if I had legs like Ronaldo I hitch my shorts up high all the time…. pic.twitter.com/55EvltyN0K

Is there any reason why Ronaldo hitches up his shorts when he takes a free kick? Is it easier to kick a ball like that? If so, why not do it all the time?

Ronaldo: *pulls up shorts revealing all the leg muscles*

Me: *pulls up shorts, pokes* … pic.twitter.com/rhirHkL3kr

Ronaldo on taking free kicks with his shorts pulled up. He wants to show his muscle legs to the crowd and camera. I mean like what's that gotta do with you taking the free kick

@Cristiano need to hit the gym, his legs aren't up to it 😂 #Beast #URUPOR pic.twitter.com/9BZbdtZcA9

Ronaldo flashing his thighs every time he has a free kick. Can't remember Beckham ever doing that to his shorts #WorldCup

Why does Ronaldo do that thing with his shorts before a free kick? Is it to put the goalkeeper off? Or is he doing a photo shoot for Attitude? #URUPOR #WorldCup2018

“Cristiano Ronaldo is the greatest player in the world.”

That’s not only the view of all Portugal and Real Madrid fans but also the president of the United States.

“They say he is the greatest player,” Donaldo Trump told Portuguese President Marcelo Rebelo de Sousa when the two heads of state met in the White House. “So, tell me, how good a player is he?” asked Trump. “Are you impressed?” I’m very much impressed. He’s the best player in the world,” nodded De Sousa.

But despite his popularity, Ronaldo has no chance of swapping the keys of his dressing room locker for the keys of state.

“So will (Cristiano) ever run for president against you?” Trump asked Robelo de Sousa. “He wouldn’t win! You know he won’t win?”. “Well, president, you know there’s something I must tell you,” replied Rebelo de Sousa. “Portugal is not the United States. It’s a little different!”