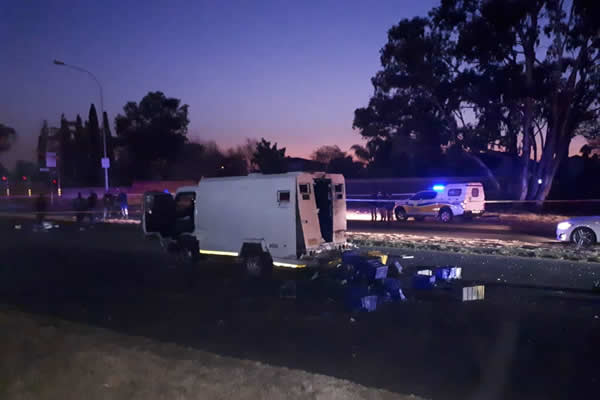 A cash-in-transit robber has been killed following a botched heist in Boksburg, on Atlas Road, east of Gauteng this morning.

Details about Thursday morning's attempted cash-in-transit heist on the East Rand remain sketchy but it's understood that one person has been shot.

Some eyewitnesses have described to Eyewitness News how a cash van was targeted on the corner of Atlas Road and North Rand Road in Boksburg.

The police's Vish Naidoo says there was a shootout between the suspects and the security guards.

“One suspect has been shot and killed and an AK47 rifle recovered. Also, a security guard was shot and wounded on his hand but I can confirm that no money was taken. We’re also starting to receive reports that some civilians may have been injured during this incident but it’s not confirmed as yet.”

At the same time, the Democratic Alliance's Community Safety spokesperson in Gauteng Michele Clark says she lives nearby.

“Between 5:30 and 6:00 this morning, I could hear AK47s go off and explosions going off very clearly and it sounded like it was happening closer to my home.”

Clark says she contacted the provincial commissioner who updated her on some of the details.

“One of the perpetrators had been fatally wounded. A bystander was injured but not seriously and apparently, the police acted very swiftly.”

A witness describes the shooting.

“I was right in the middle of that, then there was a private security company with a Toyota Hilux, white man shooting right behind where we were… shooting towards the cash-in-transit van. We couldn’t see the van because there was smoke all over.”

Another witness says he lives close by.

“From about 5:55 am until probably 6:05 am or longer, there have been automatic fire explosions coming from about 4 km from my house.”

Police say they've mobilised all their rapid response teams to track down the group of armed.