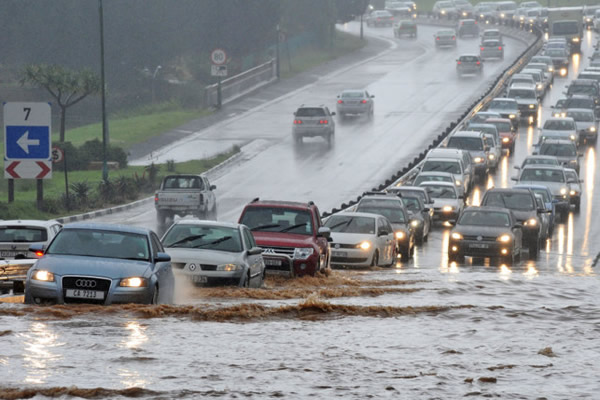 Motorists in Cape Town are being cautioned to travel with extra caution on Thursday as heavy overnight rain flooded several roads across the metropole and beyond.

Some of the areas affected included sections of road between Table View and Milnerton‚ Edgemead Drive and Chapmans Peak.

Overnight rain in parched Cape Town has resulted in flash flooding and the closure of some roads in the city.

"I don't have much information for you. I only [know] about flooding in Koeberg Road," provincial traffic chief Kenny Africa told News24.

"Numerous roadways are flooded across the metropole. Roadways in urban areas have [been] really blocked," spokesperson Charlotte Powell told News24 on Thursday morning.

She highlighted parts of the N1 and N2, as well as 35th Street and Halt Road in Elsies River, as having localised flooding.

Informal settlements in low-lying areas were also subjected to flooding.

"Informal settlements in low-lying areas are always a concern for us. They are in discomfort. We will be making assessments this morning and standby crews are out on roads already," said Powell.

On social media, Twitter users highlighted flooding on the roads around Cape Town.

In terms of traffic, Google Maps showed typical strong delays on the N1 heading into the city as well as on the N2 at the Mowbray Golf Club and the M5 north-bound past Athlone.

The M3 up toward the Wynberg Hill is also slow-moving.

Traffic movement in Cape Town is also compounded by a national bus strike that has left several thousand commuters stranded.

In the north‚ the N1 was reopened at 4am after yesterday's protest action. If you are heading towards the Drakensberg‚ however‚ truckers are reporting problems on the N3.