DOCTORS had to deliver the baby through a caesarean section.

24 hours after the deliver, doctors also had to perform a caesarean section on the baby.

The baby’s belly reportedly contained a tiny, half-formed but still growing — body of her own twin sister. 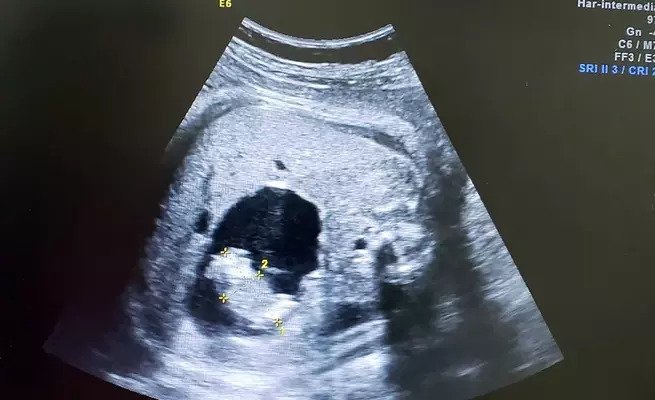 It’s reported that this rare condition called “fetus-in-fetu,” which is very rare but not extraordinary.

The condition was described in a British medical journal in 1808 and is thought to occur in about one in every 500,000 births.

According to The New York Times this case was even more unusual, because doctors clearly identified the fetus-in-fetu during the pregnancy, said Dr. Miguel Parra-Saavedra.

The high-risk pregnancy specialist in Baranquilla, Colombia, who oversaw the birth said he first saw the mother, Monica Vega, when she was in her 35th week of pregnancy, five weeks short of a full-term birth.

Her obstetrician believed her fetus had a liver cyst.

But, using color Doppler and 3D/4D ultrasound imaging, Dr. Parra-Saavedra was able to see that the fluid-filled space actually contained a minuscule infant, supported by a separate umbilical cord drawing blood where it connected to the larger twin’s intestine.

“I told the mother, and she said, ‘What? No, doctor, this is impossible,’" Dr. Parra-Saavedra said. “But I explained step by step, and she understood.”

The publication reported that the doctor alerted a local television news network, which followed Mrs. Vega, who is now 33, through the birth of her daughter, Itzamara, and the surgery to remove Itzamara’s partially formed twin.

Fetus-in-fetu is sometimes misdiagnosed as a teratoma, a tumor that may contain bones, muscle tissue and hair.

A DNA comparison is being done, but Dr. Parra-Saavedra has no doubt that the fetuses started out as identical twins from the same ovum.

Because the smaller fetus took nourishment from its sibling, it is called a heteropagus or parasitic twin.

Some heteropagus twins are born conjoined to their healthy siblings, while some grow partially inside and partially outside their twin’s body.

The fetus-in-fetu condition is believed to arise soon after the 17th day of gestation, when the embryo flattens out like a disc and then folds in on itself to form the elongated fetus.

On dissection, the growth turned out to have a partially formed face with an eye, a tooth and black hair. Doctors concluded that it was a twin she had absorbed while in her mother’s womb.

Itzamara is doing well, Dr. Parra-Saavedra said. “She has a little scar on her abdomen, but she is a normal baby now except that the whole world is talking about her.”

General News Ethel nleya - 1 October 2020 0
Warning: This article contains video footage of an incident in Wentworth, KZN, where a car loses control and drives into a group of schoolchildren....