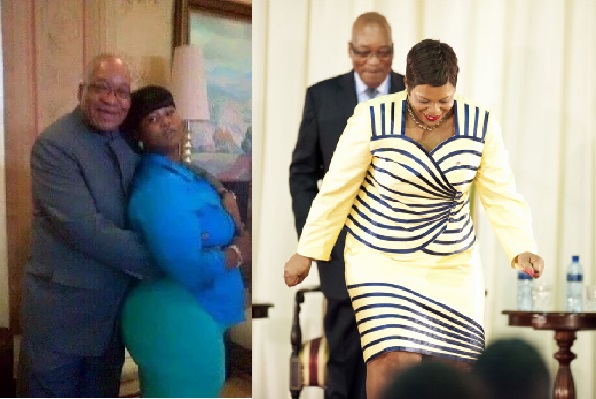 Former president Jacob Zuma is not planning to ride gently into retirement for he is about wed his seventh wife, who already has his child and is younger than him by half-a-century.

Virginity testing lobbyist Nonkanyiso Conco, 24, confirmed to the media yesterday that she was about to become the next Mrs Zuma, a week after she gave birth to his baby at the Busamed Private Hospital in Hillcrest, KwaZulu-Natal. This is Zuma’s 23rd known child. The two families were believed to be ecstatic and it was reported that Zuma had already paid lobola.

Not much was known about the new bride and it wasn’t known how the couple has met. However, it was believed she had a crush on the elder statesman even as a teenager. It could have been the time when they first locked eyes on each other.

On September 3, 2013, she had tweeted a day after the annual reed dance: “Don’t believe this, OMG! Am going back to that Hollywood house to spend the whole weekend this time! #Zuma’s home @ Nkandla! Whoopee, can’t wait.”

At the time Conco was the director of the Nomkhubulwane Culture and Youth Development Organisation in Pietermaritzburg and was a strong advocate for virginity testing and abstinence.

This was noted in a controversial comment she made to Independent Media in 2013. She had said that opening the reed dance festival to other races would dilute the value of the ceremony. She added anyone who participated in the ceremony should do it in a Zulu traditional way, or not at all.

“First, those Indian and white women should go through virginity testing in a traditional way. I get tested every month. As we were waiting to collect the reeds, police pushed us aside to open a space for Ella to pick up the reed ahead of us and lead us. I felt undermined and insulted,” said Conco.

Founder of the organisation, Nomagugu Ngobese, said she didn’t want to get involved by commenting on the matter as Conco was no longer with their organisation. Also tight-lipped on the future nuptials was Zuma’s spokesperson Vukile Mathabela.

“On such matters, it’s a family thing so you can try to get Edward Zuma and all those people who are family spokespeople (to comment).”

Twitter was divided over the matter. @Phumele Magacayi seemed to support Zuma’s decision saying that it’s part of Zulu custom that an old, respected man takes a young wife for his old age. In isiZulu, it’s called indlu yokugugela which means retirement home.”

Msholozi was also praised for his actions on Twitter by @sihlenotwabaza, who said he was leading by example.

“He’s reducing the percentage of absent fathers, him marrying this girl is deeper than just two individuals becoming husband and wife. Let’s be positive this child will grow with both parents”.

But others didn’t take too kindly to the news. Luphondo@BabalwaLuphondo said: “Our parents went to Durban to support you for the fraud case against you; now we are the laughing stocks of the nation for having your back. Come on baba!”

The first Mrs Zuma was Gertrude Sizakele Khumalo, also known as MaKhumalo. They were married in 1973. Also during the 1970s Zuma wed Nkosazana Dlamini Zuma. They have four children, Msholozi, Gugu, Thuli, and Thuthukile, and divorced in 1998.

In 1976, he married Kate Mantsho, who died in an apparent suicide in 2002.Their children are Saady, twins Duduzile and Duduzane, Phumzile, and Vusi.

It was a while before Zuma decided to settle down with number four. This was Nompumelelo Ntuli Zuma (MaNtuli). MaNtuli and Zuma are believed to be separated following her having an affair with her bodyguard.

There could even be more Mrs Zumas in the future. In 2002, it was reported that Zuma paid 10 cows for a Swazi princess, but the marriage has not been officially announced.

Also read: List of 15 women Jacob Zuma had unpro.tected s_ex with and names of 23 children he fathered with them