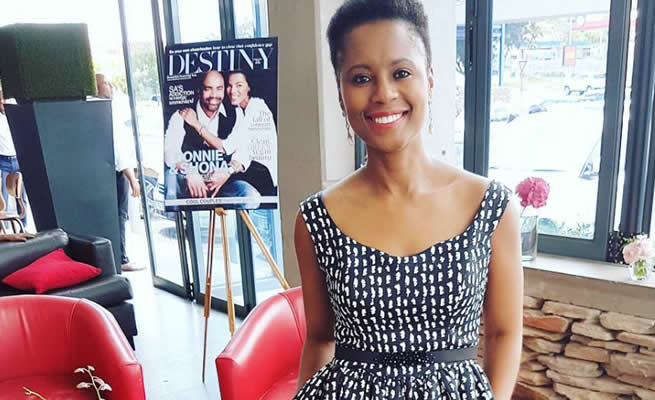 The media mogul’s company Ndalo Media was taken to the high court in Johannesburg by CTP Printers last week following her company’s alleged failure to keep up with payments for the printing of her publications, including SAA in flight magazine Sawubona, Destiny, Destiny Man, Elle and Elle Decoration.

According to CTP Printers’ financial manager David Martin’s affidavit, the debt in question was accumulated between 2016 and this year.

Ndalo Media is yet to file their answering papers.

Martin said in the court papers that every time Ndalo had to pay for services rendered, the company always requested indulgences.

This, he said, were reflected in numerous exchange of e-mails between him and Chijioke, whom he said describes herself as the founding editor and CEO of Ndalo Media, as well as her senior staffers.

She is interchangeably referred to in her maiden name Dhlomo in the court documents.

“Indulgences and latitude granted to the respondent over the aforesaid period eventually culminated in the respondent becoming indebted to the applicant in the amount of R13 207 755.33,”showpapers.

The papers further show that Ndalo Media at some point entered into a settlement plan with CTP Printers to make certain payments to clear the debt. These payments, ranging from R1m to R2.6m, were supposed to be made from August this year, but Ndalo still failed to meet its end of the deal, the papers show.

The printing company further stated that Ndalo Media promised again to clear the arrears in their account, this time through Ndalo’s lawyers in a letter dated October 2 2018.

In the letter, according to the papers, Ndalo had asked for an extension on its due payments to be moved from October 8 2018 to October 10 2018.

“Dear Paul, … Just confirming that we’ve agreed on the following: The amount that was due to CTP on 15 November 2016 will be paid on December 2016, with 2 December 2016 being the latest date by which it will be settled,” reads one of Dhlomo’s e-mails titled payment agreement.

According to the letter by Ndalo’s lawyers Judin Combrink Attorneys, annexed to the papers, the company offered three properties worth R100m as security in favour of CTP Printers for the money they owed.

The letter, dated October 29 2018, stated that the three properties were owned by a company called Kouga Pack, which according to CIPC records, had Chijioke and three other Dhlomos as directors.

Among the properties put down was one located at Isipingo in KwaZulu-Natal worth R55m and a stand located in Alrode, Gauteng, which is valued at R31.5m.

The other property, according to the legal correspondence, was in Cape Town and worth R15m.

“The total value of the aforesaid properties as valued by Jamrec Property Solutions in 2017 is R101 688 000. Investec currently holds a registered bond over the properties in the amount of R60 000 000,” reads the letter from Ndalo’s lawyers.

However, the papers show that this promise was also not honoured as Ndalo allegedly defaulted. The documents show that it was only after the company was served with a settlement indicating the amount due to them that Ndalo made a payment of R200 000 to the printers, reducing the amount owed to R9.6m.

The printing company said it later issued a letter of demand to Ndalo which was acknowledged by Ndalo’s lawyers.

Despite this, according to CTP, Ndalo requested further printing work to be done, adding R2.4m to its debt.

Chijioke and her lawyer Judin Combrink failed to respond to questions send to their emails, SMS and WhatsApp.