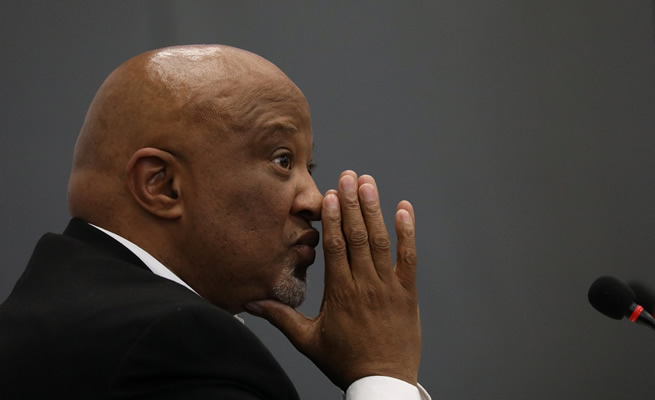 FORMER deputy finance minister Mcebisi Jonas delivered several bombshells on Friday, while he was guiding Deputy Chief Justice Ray Zondo through the chronology of events of state capture as he experienced it.

He told the commission that one of the Gupta brothers threatened to kill him, should any details of the infamous meeting between him, Jonas, Duduzane Zuma (the son of former president Jacob Zuma) and businessman Fana Hlongwane ever become public.

Jonas claimed that the Gupta family offered him an initial R600 000 in cash, and then R600 million to be given later, if he accepted the job of finance minister offer. He was expected to replace Nhlanhla Nene, who was fired in December 2015. Hawks head, Lieutenant General Godfrey Lebeya, has reacted with “serious concern” after Jonas told the commission that a senior Hawks member had allegedly tried to “kill” a case investigating allegations that the Guptas had tried to bribe former finance minister Mcebisi Jonas.

Jonas told the commission that the Hawks tried to “kill” the case, by preparing a statement contradicting his previous media statement that he was offered R600m – if he took the job as finance minister in 2015. Jonas said he was contacted by then Hawks head, Berning Ntlemeza. Ntlemeza decided to assign Major-General Zinhle Mnonopi – the head of serious corruption investigation – to the state capture case opened by political parties, the DA and Cope.

“Mnonopi said this was a DA matter and that I did not want to help the DA and they want to kill the matter,” Jonas testified.

Jonas said Mnonopi wanted him to sign a prepared false draft statement to say that he was not a witness to corruption, but he was unwilling to do so.

“The statement was settled by an advocate. Was the identity of the advocate revealed?” Mokoena asked Jonas.

Although Jonas responded that the name was revealed, he could not recall it. Mokoena asked him to “take the necessary steps” to come up with the name.

In a short statement on Friday, the Hawks said: “The Hawks is following the process closely and will apply the laws that are being invited. We support the work of the commission and will allow the witnesses to complete the testimony without distraction before enlisting their assistance in visiting the matter.”

Some of the other key points from Jonas’ testimony:

WEAK
Zuma and his sidekick, alleged arms deal fixer Fana Hlongwane, came across as weaklings who were only there to organise access for Gupta. They harassed and badgered Jonas, only to fade into the background and remain quiet once The Don from Saxonwold entered the room.

SPYING
Gupta seems to be a bombastic bully, who marched into the room where Jonas waited with Zuma and Hlongwane. He proceeded to explain to Jonas that he has gathered intelligence on him and that he has “the capability” to do so. He threatened to use that information “to destroy” Jonas’ political career.

CAPITULATION
“You must understand, we control everything: intelligence, the Hawks, the NPA. The old man will do anything we tell him to do,” Gupta told a startled Jonas.

“I was shocked and angered,” he told the commission.

DEATH
Jonas was agitated and angry, and attempted to leave. Gupta walked him out the door and seemed like he wanted to punch Jonas, who had dismissed all the businessman’s advances. He then added that if details of this meeting became public, he would “kill” Jonas.

BUGS
Jonas shared what had happened with Nene. They had to meet on the balcony of Jonas’ office at Treasury’s ministerial offices on Church Square because they feared that listening devices had been planted in their offices.

BROKEN
Jonas had no confidence in the institutions comprising the criminal justice system to investigate the matter. “The police, Hawks were seriously compromised. There was no reasonable prospect of success.”

HOSTILITY
Treasury received no support from Zuma and there was open hostility between its ministers and Zuma and the rest of Cabinet. They attempted to “hold the line” against state capture, Jonas said.

NUCLEAR
Nene was dismissed because he was opposed to the nuclear deal, which Zuma was pursuing with Russia, Jonas said. “The pressure on us from Zuma to approve the deal was immense,” he said.