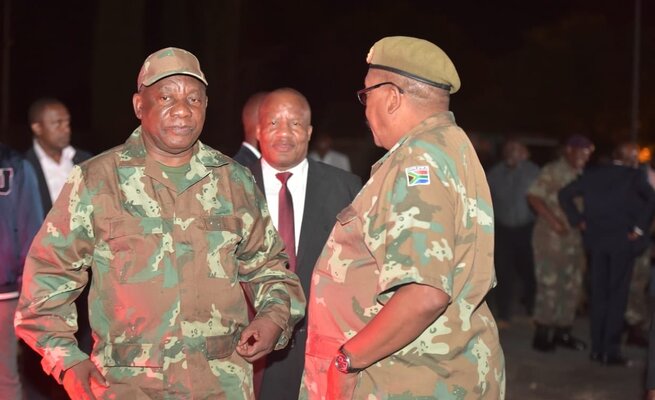 President Cyril Ramaphosa was convinced that the rot in the security cluster ran too deep to cure and some of the institutions were virtually dead, making it difficult to put all the blame on individual ministers.

According to his close associates, this was why he did not axe all of the current security cluster ministers, believing that the problems went deeper than their reach and would take a long time to fix.

On Thursday night, the president shook up his Cabinet, saying the move was intended to enable government to respond effectively to the current challenges of accelerating the vaccination programme and maintaining peace and stability, as well as reviving the economy.

Defence and Military Veterans Minister Nosiviwe Mapisa-Nqakula was the sole minister to be completely dropped, as others were moved to different portfolios.

Mapisa-Nqakula had not only been incompetent in her post, but had publicly contradicted and defied the president on more than one occasion. She was replaced by National Assembly Speaker Thandi Modise.

Following her to the exit door was former health minister Zweli Mkhize, who resigned hours before the Cabinet reshuffle was announced. Finance Minister Tito Mboweni – who had long been asking to leave – also threw in the towel, and Ramaphosa finally accepted his request to step down after trying for some time to persuade him to remain.

City Press reported that, by the time his departure was announced, Mboweni had changed his mind and was no longer so keen to leave.

Former deputy minister of state security Zizi Kodwa moved to the presidency in the same position, as Ramaphosa removed the need for a full ministry.

He also said that the security cluster had been found wanting during the recent public unrest and he would thus appoint an expert panel to lead a thorough and critical review of the state’s preparedness and the shortcomings in its response.

An associate of Ramaphosa’s said the initial idea of the reshuffle was sparked by the need to replace the late minister in the presidency Jackson Mthembu and the late deputy minister of mineral resources and energy Bavelile Hlongwa.

“But you also need to have a holistic review of all positions against the contracts that ministers have,” said the associate.

He said the inadequate response of the security cluster during the riots was also a factor, but insisted that, as institutions, the SA Police Service intelligence and the SA National Defence Force intelligence had been completely destroyed by the time Ramaphosa took over. The influence of former president Jacob Zuma’s administration has persisted, he said.

“It will take a long time to clean them up and revive them because when they’re weak, they favour certain people or cabals who’re then able to operate with impunity. For these people, the only way to survive is by [ensuring that their] workplaces are non-functional.”

Of the much-criticised movement of state security to the presidency, another official said this was an international phenomenon: “Most countries don’t have stand-alone intelligence ministries. Intelligence services report under the political leadership of the head of state.

This includes Brazil, Russia, India, China and South Africa – the Brics countries. Even under president Nelson Mandela, it was like that.”

Cosatu spokesperson Sizwe Phamla explained that the president had consulted them about the reshuffle, but they had no input regarding the appointments.

“The consultation wasn’t necessarily to ask whether we had names of people we’d like to see being deployed into the executive. It was more like: ‘This is what I’ve been working on. So what do you think?’” he said.

Phamla explained that anything that went wrong would have to be accounted for by the ANC because of the limited input Cosatu had had.

“If it’s your decision, then the buck stops with you. If you haven’t looked at the performance of your team and you’re happy with what they are bringing to the table, we can only note it. We’ll give [the president] the prerogative of putting together his own team so that if they fail, he doesn’t have an excuse,” he said.

Political analyst Daniel Silke believes the changes that were made were largely forced on the president, particularly in the case of the health and finance departments: “I think this reshuffle was much more about getting some sort of political support for Ramaphosa, rather than addressing the real issues of which Cabinet ministers had been performing and which hadn’t. So, to me, it was what I’d call an underwhelming Cabinet reshuffle.”

He said the president should have removed Police Minister Bheki Cele and done a thorough review of economic cluster ministers.

“I think many of the existing ministers should either retire or be [removed]. We’ve seen the South African economy really failing over many years. However, I certainly agree that the ANC urgently needs to develop a serious group of youth leaders to begin the process of renewal in the party over the next number of years.

We’ve seen politics and the internal dynamics that the ANC still plays out, keeping all the constituencies really happy. I think there was a missed opportunity by not bringing in somebody from the outside – from the private sector – who could perhaps have assisted and helped improve the sentiment in the country,” said Silke.

He added that he believed the decision to move the state security apparatus to the presidency was an attempt to take charge of it and that it should be reviewed in the future.