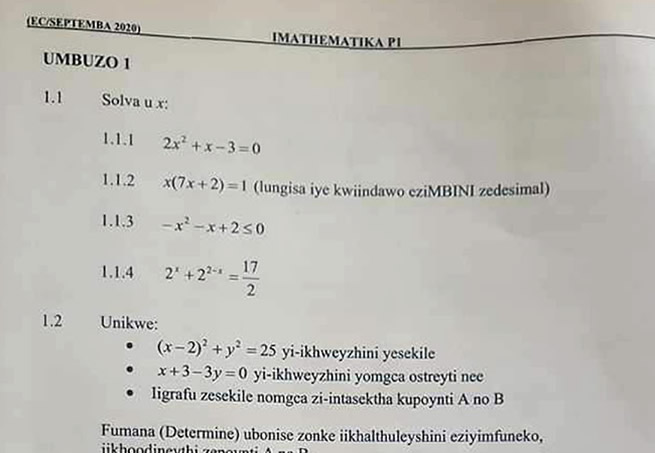 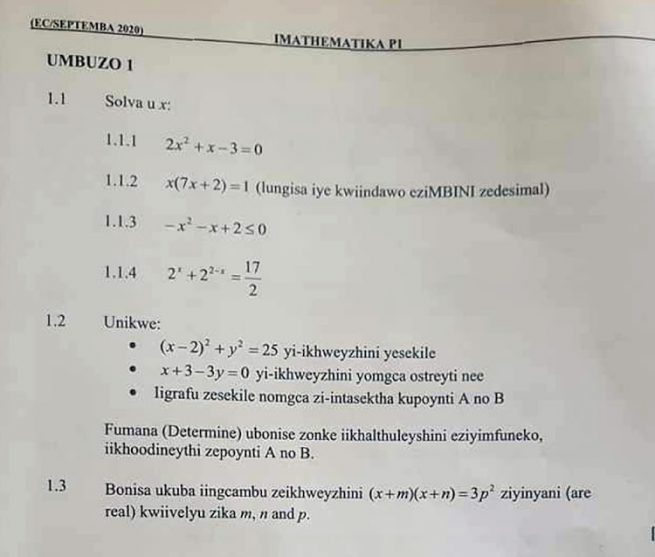 An odd choice of words used in the first ever Xhosa mathematics paper 1 for grade 12s in the Eastern Cape has caused a stir among teachers and pupils.

The paper written last week was part of preliminary examinations for grade 12 pupils. There have been mixed reactions to some of the translated Xhosa words used in the exam paper such as Septemba for September instead of Eyomsintsi, ithem for term and solva for solve instead of ukuxazulula.

A teacher at Bazindlovu Senior Secondary School in Mqanduli near Mthatha dismissed the paper's language as "fanakalo", the lingua franca of the mines in SA.

“The problem started when they wrote September as Septemba instead of Eyomsintsi and mathematics as IMathematika instead of izibalo. This was a good idea [but] unfortunately they totally disrespected the language,” he said.

Even pupils felt the language was confusing. A 17-year-old pupil at St James Senior Secondary in Cofivamba said: “It was a bit difficult for me and I ended up using the English side as I could not understand the Xhosa written there.”

A pupil at Ngangelizwe Secondary in Mthatha said: “I don't know why they bothered with the isiXhosa version because they decided to write a translation of isiXhosa in English."

However a teacher from Moses Mabida Senior Secondary in Kirkwood, near Uitenhage, saw nothing wrong with the paper.

“The inclusion of isiXhosa version helped for better understanding of the questions as they were directly translated,” he said.

An 18-year-old grade 12 pupil from the same school said the question paper was clear and understandable.

“Even though isiXhosa can be a bit difficult at times there were a few things that I could not understand on the English side and I checked them on the isiXhosa side which helped me a lot,” he said.

Another pupil from the school said he understood the Xhosa question paper better than the English one.

The province said it had conducted research that showed pupils could be struggling with English as a language of teaching and learning, leading to underachievement in matric exams. It proposed an examination in both English and Xhosa in grade 12 which was approved by the Council of Education Ministers earlier this year.

Dr Naledi Mbude, deputy director general at Eastern Cape education, said the paper was created to accommodate Xhosa speakers in both western and eastern halves of the province.

“We have never had a maths exam in an African language so we had to develop the body of the language to accommodate everyone as we have different dialects in the province. In the question paper we used the language of mathematics and we moved towards the language of the subject which has its own register. We had to use mathematical terms so that we do not confuse our learners,” Mbude said.