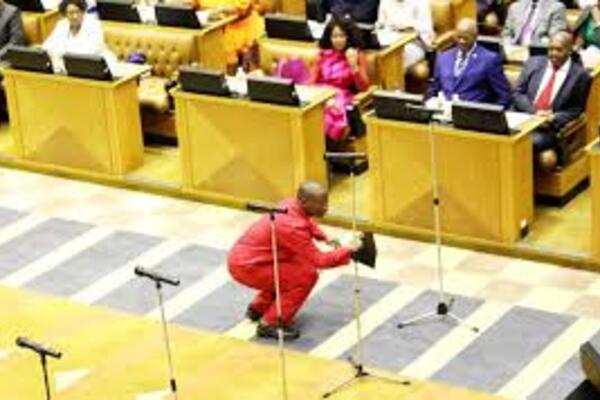 The National Prosecuting Authority (NPA) has confirmed it has charged EFF leader Julius Malema for allegedly firing a weapon in public during a party rally in the Eastern Cape in 2018.

NPA Eastern Cape spokesperson Luxolo Tyali confirmed the charges in a statement, saying the EFF leader has been charged with five counts, including the unlawful possession of a firearm.

A video emerged in August last year of Malema firing what looks like a high-powered automatic rifle into the air at his party’s fifth-birthday celebration at Sisa Dukashe Stadium in Mdantsane, in the Eastern Cape.

EFF spokesperson Mbuyiseni Ndlozi claimed at the time that Malema had fired a toy gun rather than a high-powered automatic rifle.

“It was not a real gun, it was a simulation which collaborated with the fireworks. We use it, and we always do, to evoke both the celebrations and the memory of the struggle of our past as black people in South Africa, so it’s not a real firearm, it’s not a firearm, actually, and no bullets were fired […] it’s a toy gun, it’s a toy,” he told Jacaranda FM.

Lobby group AfriForum held a media briefing on July 10 announcing their decision to privately prosecute Malema on various charges, accusing the NPA of refusing to act against the EFF leader.

The head of their prosecutions unit, advocate Gerrie Nel, detailed the organisation’s decision to try and prosecute Malema over cases including his alleged role in the 2012 On Point Engineering scandal and his alleged firing of the weapon last year.

The African National Congress Youth League (ANCYL) eThekwini Region called for the police to probe Malema at the time, wanting him charged under the Firearms Control Act.

“It is the considered view of the ANC Youth League that this behaviour was unsafe, irresponsible and was also in contravention of section 120(7) of the Firearms Control Act of 2000,” said the league on Wednesday in a statement attributed to eThekwini region spokesperson Thulisa Ndlela.

“We, therefore, call upon law enforcement agencies to investigate this conduct. Even for a morally compromised fellow like Julius Malema, such conduct is unacceptable and must be condemned.

“The ANC Youth League is concerned that such a public display of reckless behaviour will undermine the efforts made in fighting violent crime in our society.”