Zahara is challenging DJ Sbu to a sit-down TV interview to set the record straight on the money that is still allegedly owed to her for her Loliwe album.

Popular pot-stirrer and twelep Barry Roux recently tweeted that he wished that Zahara would re-record her Loliwe album so that she could start benefiting from it financially. The twelep implied that Zahara was not getting paid royalties for her music. 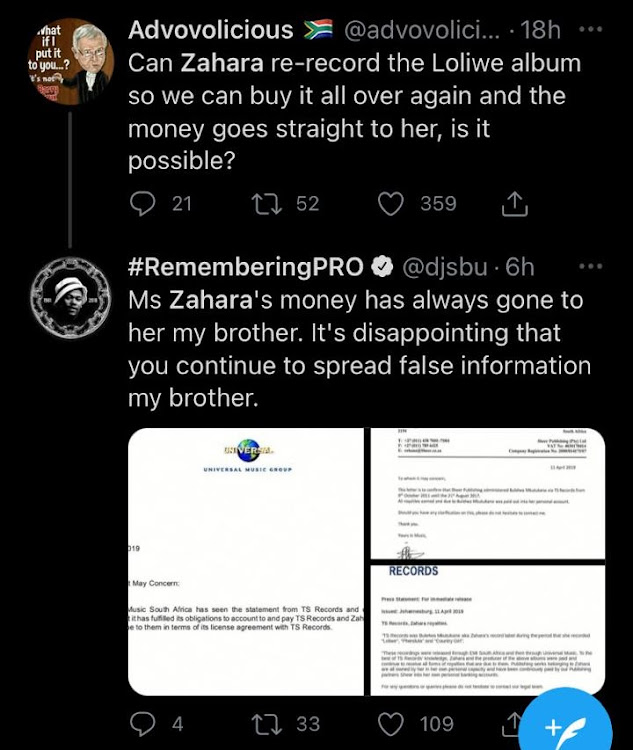 DJ Sbu was quick to slam those claims.

“Ms Zahara's money has always gone to her my brother,” Sbu responded, attaching a screenshot of three documents in which it's alleged that Zahara receives what's due to her.

Zahara said that she has never received any funds for the work she did with the Loliwe album.

Zahara added, “I haven’t been getting anything since I left the record label, and I saw recently that my music was uploaded on digital platforms without me knowing, which means they sold my records to somebody and it means I need to get a cut for it.”

The Mgodi hitmaker went on to say that she had made various attempts to make contact with DJ Sbu since their last conversation nearly a year and a half ago.

“When I tried to communicate several times even last year, I tried so many numbers to contact them and no-one answered their phones … I always call them … they don’t care.”

The singer added that she had thought of taking them to court but knew that she would not be able to afford the fees.

“At the end of the day they know that if I go to court I do not have the resources or the money to fight them because they know they have money. God has given me a gift which nobody can take and I can start afresh like I am doing right now,” Zahara said.

Zahara is adamant that the only thing that can settle their long-standing spat is a TV interview and would like DJ Sbu to answer her call.

“DJ Sbu must stop lying. He must be in a studio with me one day somewhere … a TV interview where I say what I say and he says what he says … he must stop lying because he is a coward.

“It doesn’t really matter, me I can always go back to sing for my cows but the truth is the truth … it wouldn’t have escalated like this, they should have just let it go because I’m speaking my truth and it’s the truth … I don't want to hear nobody said nothing, I want DJ Sbu in a TV room with just me and him … where we both say what we want to say,” the musician said.

Till then Zahara says that she is just focusing on her new music and launching her next album which was postponed due to the lockdown.

Attempts to get comment from DJ Sbu on Zahara's allegations failed. The DJ had not responded by the time this article was published.