vandalised and the word ‘cheater’ written all over it.

Former finance minister Malusi Gigaba is in hot water once again over his private life after numerous rumors surfaced that the politician has been caught cheating once again.

Malusi and Norma Gigaba have been married for a couple of years, and the start of their relationship has been contentious, especially after accusations that Malusi had cheated on his first wife, Thabong Gigaba, with Norma.

This is what we know so far:

Apparently this is Melusi Gigaba's car 😭😭 the wife did this 😭😭 pic.twitter.com/eXxRyI9bmi

A video is going the rounds on social media of what is alleged to be Malusi’s car. It shows a Mercedes G Wagon being keyed, vandalised and the words “cheater” written all over it.

Word on the streets is that Norma has had enough after finding out he cheated again.The politician’s surreptitious affair with Norma in 2017 was made public, and Norma addressed the cheating rumors after a New York-based fashion stylist Buhle Mhkize released details of her affair with Malusi.

Norma said publicising the affair had been hard on her family as she has two sons with the politician, but they were making it work during that time.

The alleged ‘other woman’ is pregnant

Rumour has it that the woman Malusi allegedly had an affair with is expecting twins, but the couple has not addressed any of these allegations.

Malusi’s first wife, Thabong, seems to have addressed the recent accusations. She posted: “Karma has no menu. You get served what you deserve.” 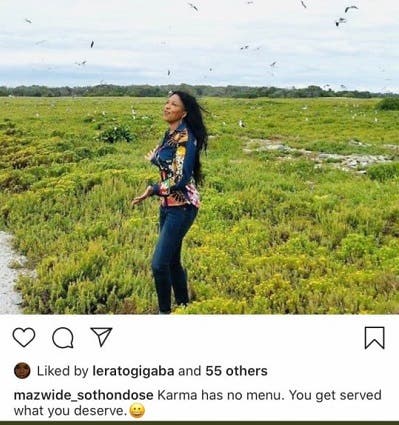