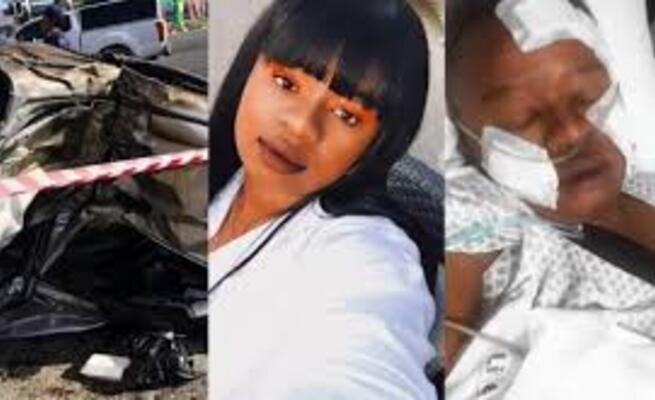 Model Thickleeyonce is thankful to be alive, kicking, and on the mend after surviving a horror car crash that left her admitted to Intensive Care Unit.

Giving a reflection on the accident that almost took her life, she recently posted a video on YouTube, in which she explained that she and her family were returning from church when the incident happened.
“As I was about to turn, we were hit by a speeding motorbike … The car spun with us.

Everything happened so fast. I remember hearing a loud bang! In that moment, I didn't know what was going on. I just remember having my eyes shut and thinking what just happened and just accepting my new reality, whatever it was, whether I am dead or what,” she said.

She added; “I opened her eyes only to find my body was upside down. My legs were around the steering. It was just such a mess. I could feel blood all over my face. I just remember opening my eyes and being so scared.”

Thickleeyonce said at that moment, she was worried about her younger sisters and four-year-old nephew, who were also in the car.

Fans were left frightened, fearing the worst last month when the star took to Twitter to reveal that she had been in ICU.

“(I have) been in ICU for the past days. This is the most traumatic experience of my life. I cannot thank my God enough for giving me a second chance to live. God protected me and my siblings from a very tragic accident, I am filled with gratitude. I am still in ICU and recovering,” she said.

Later, she was back on the platform to lambast those who have been criticising her for using social media while in recovery, telling them: “I'm not dying. Try again, and please don't shame me for doing things that make me feel like myself. It's hard enough being in this depressive state of mind,” she chided.