When you think you have a supportive sister but all she is, is a cheat that's sleeping with your man.

Yep, Sunday night's episode of Uyajola 99 got real when we got introduced to a young lady who was suspecting that her man was cheating on her with another woman.

As always, Jub Jub and the Uyajola 99 crew were on a mission to get to the bottom of this situation as quickly as possible.

After much research, Jub Jub returned to the young lady who was being cheated on with a damning truth that was surely going to break her heart.

Jub Jub found out that the lady's sister was the mysterious woman who was cheating with her man, and once she confronted both cheaters, all hell broke loose.

The 25-year-old busted her sister and lover together at some retail store and before Jub Jub could even attempt to grab her before she did any bodily harm, it was too late as the young lady threw punches at everyone in her way.

She began by slapping and punching her sister then went on to hit her man as well.

The woman was so furious with both cheaters that she even broke her bra-strap and before we knew it, her entire breast was hanging out for the world to see.

When Jub Jub tried to confront the sister about the affair, he found himself dashing for his life as the sister continuously slapped him as she tried to get him out of her way.

When she finally calmed down, Jub Jub enquired about the affair, and all that the sister could say was that the couple stays at her house and she pays for their food so there is nothing in life that is free. Wow! 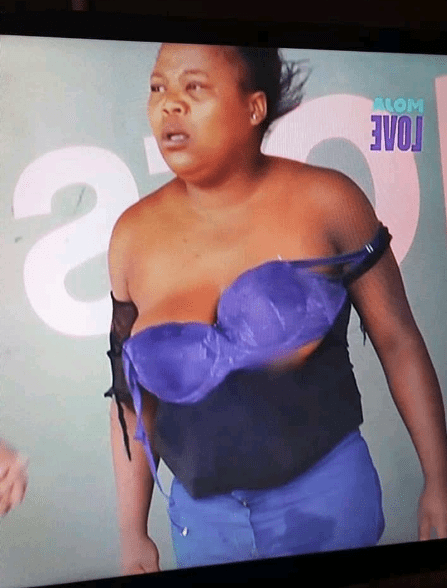 Some viewers were clearly disturbed by this woman's action and could not understand why she had to cheat with her sister's boyfriend.

Meanwhile, on the other hand, the said boyfriend expressed that he was cheating on the lady with the sister because she (the lady being cheated on) has grown to be quite disrespectful to him and drinks too much alcohol.

But what happened to sitting down and ironing things out with your partner before going out to cheat?

Ja neh, dating these days is such an extreme sport.-