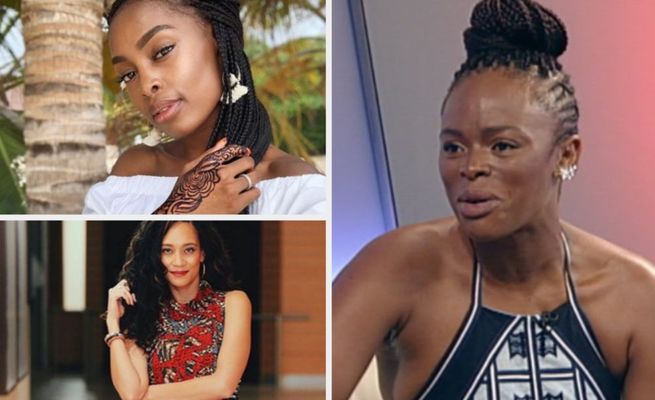 It’s Valentine’s Day and scores of couples are taking to social media to publicly show their appreciation for their loved ones.

While many single people are feeling a tad bit depressed about not having a Valentine, these Mzansi stars are single and loving it.

They have been through messy break-ups and lived to tell the tale. Their stories have inspired their fans.

Take a look at five celebrities who don’t mind being single on Valentine’s Day because they are too busy loving themselves.

K Naomi is single and not ready to mingle. She took to her Instagram Story last month to let her followers know that she is focusing on herself.

“I am 130% single… Building my relationship again with myself before trying with anyone else,” she wrote. The star spoke publicly about the dramatic end of her relationship with DJ Shimza in 2018.

“Thank you for breaking me,” she captioned a picture of them together in happier times. “Your biggest commitment… To ALWAYS love yourself,” she wrote on Valentine’s Day (today!)

Media personality Melanie Son and Zwai Bala ended their nearly two-decade long relationship in 2017. She revealed in an emotional Instagram post that their split was hard on her.

“My marriage was over, my father had died. I was in therapy, on anti-depressants, barely sleeping and crying every single day. I hid it all very well except to those very close to me,” she wrote.

But Melanie is a much better place these days and is enjoying her life as a single mom. “#mood Making dinner for two. Eating both. Happy Valentines Day lovelies!” she wrote on Thursday.

It’s been more than two years since Unathi announced she was separating from her husband Thomas. Since then the singer has received a lot of attention from the opposite sex – particularly from married men!

But Unathi is not obsessed with finding herself a new partner, instead she is living her best life as a single woman.

“I feel like that 22-year-old who first moved to Johannesburg in 2001. Being single is fantastic because I am getting to know myself and what I genuinely like and it’s a wonderful place to be. I’m going to stay single for a very long time,” she told the Sowetan.

The end of Gigi Lamayne’s relationship with DJ Citi Lyts in 2018 sent her spiralling down a dark road.

“You’ll be loyal AF. They’ll abuse you and accuse you of cheating because they know what they’ve been doing all along,” she wrote on Twitter in September last year.

Two months later, the rapper, who suffers from depression, tried to commit suicide. But her darkest moment led to something special. Gigi now holds workshops around the country to talk about depression.

“Clearly I’m alive to tell my best story yet. I love you for loving me at this time of weakness. You made me strong. Now I work on myself. Now I love myself,” she said after being discharged from hospital.

TV presenter Abigail Visagie had her heart broken twice in one year. She quietly broke up with athlete Akani Simbine in early 2018 and started dating again. But that romance also ended in heartache.

These days Abigail is focused on loving herself more.

“‘That’s the problem with putting others first! You taught them you come second!’ SELF LOVE FIRST!” she wrote on Instagram this month.