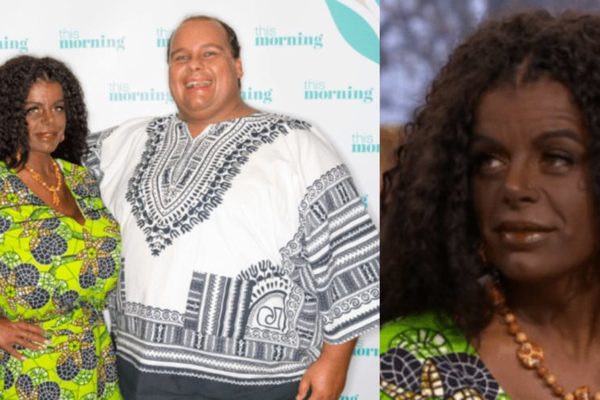 A White woman who changed her skin to black has disclosed that her doctors have told her, she and her white husband could have black-skinned children.

Martina Big and her husband, Michael joined Holly Willoughby and John Barrowman on This Morning to talk about how they’ve changed race and could have a black baby.

The German model, who began taking melanin injections two years ago to transform from a white woman to a black woman, revealed the many physical changes that have taken place, telling audiences:

‘The skin is getting darker and my growing hair is changing and getting curly and more dark.’

Besides also admitting that she now identifies as a black woman, Martina revealed how doctors said her and her white husband could give birth to a black child.

‘Yes, they said they’re going to be black,’ Martina said.

‘We are not having plans, but I am discussing with my doctor to see if my body is okay, will I be able to breastfeed, what the baby will look like.

‘I’m trying to think genetically how that is possible,’ Holly interrupted. ‘If you give birth to a white child will you somehow think it’s not connected to you?’

‘No,’ Martina replied. ‘It’s a mix of Michael and me. I’m pretty sure it will be black or milk chocolate or a little bit light, it doesn’t matter.’