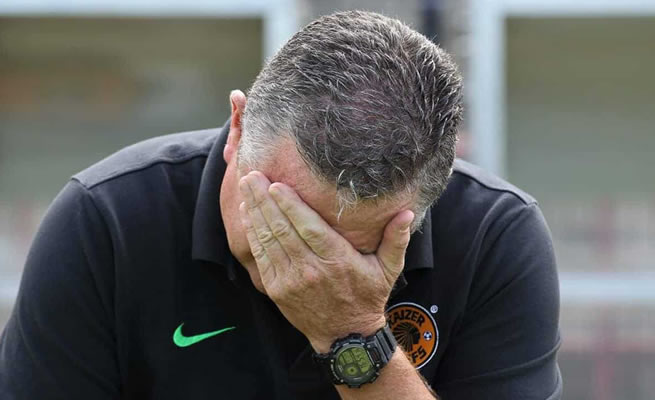 Gavin Hunt could be heading for the exit door at Kaizer Chiefs come the end of the season and a familiar face has been tipped to replace him!

Kaizer Chiefs are currently in 10th place on the DStv Premiership log standings with just four games to go and the club are reportedly looking at getting rid of Gavin Hunt!

Hunt joined the Amakhosi with much expectancy at the beginning of the season in a blockbuster move however the Four-time league winning coach has found the going tough at Naturena.

Many expected the former Bidvest Wits coach to guide Kaizer Chiefs to the league title following last season’s final day heartbreak but six months in and the Amakhosi have regressed in shocking fashion.

Gavin Hunt’s side have earned just six league wins in 26 matches meaning they’ve dropped points on 20 occasions since the beginning of the season.

While it must be mentioned that Kaizer Chiefs made history by first qualifying for the CAF Champions League group stages and then following it up with a string of incredible performances that saw them qualify for the knockout stages as well.

Their domestic form has been a shadow of their continental form and a coaching replacement is on the cards at the end of the season according to South African heavyweight soccer journalist Velile Mnyandu.

“Kaizer Chiefs could be in for their fifth coaching change in the space of just three years, with a return of Stuart Baxter being touted at Naturena.” – IdiskiTimes reported.

Stuart Baxter is currently unemployed after he was sacked in controversial fashion at Indian club Odisha FC last year. The 67-year-old guiding the Amakhosi to two league titles in three years at the club.

He further went on to lift the Nedbank Cup and MTN8 with Kaizer Chiefs and will undoubtedly be at the top of Kaizer Motaung’s shortlist should Gavin Hunt be axed.