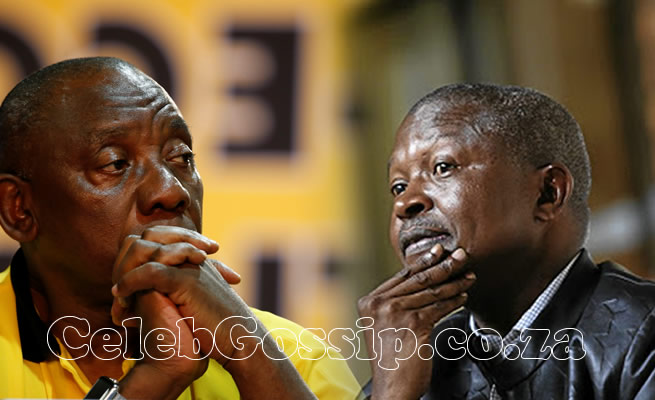 President Cyril Ramaphosa’s bitter opponents within the ANC are aiming their guns at his deputy, David Mabuza, and are working to prevent him from returning to his post after next year’s elections.

Senior sources in the ANC told City Press that work was under way to ensure that Mabuza did not get the number two position on the electoral list when the party concludes the list process, which starts now and will end in December.

Although this would not rule out Ramaphosa using his prerogative to appoint Mabuza, it would humiliate and weaken him immensely.

The humiliation of Mabuza would also serve as a means of “testing the balance of forces” to see whether Ramaphosa himself can be recalled at the national general council, to be held after next year’s elections.

Names being bandied about as possible replacements for Mabuza include international relations minister Lindiwe Sisulu and party chairperson Gwede Mantashe.

While former president Jacob Zuma is not outwardly leading the drive, he is said to have been involved in at least three discussions in different meetings.

ANC secretary general Ace Magashule had been mentioned as being among the anti-Ramaphosa plotters, but this week he denied the allegations, saying there was nothing sinister about the meeting he’d had with Zuma and others in Durban last week.

ANC spokesperson Pule Mabe told City Press that going forward from Nasrec, the ANC had committed itself “both in deeds and actions to the process of unity and renewal”.

“We are all investing our time and efforts towards that. The leadership collective [is] committed to the attainment of unity and renewal within our ranks.”

He said the ANC would not be “sidetracked away from our overall programme, which is beginning to show positive signs, as evidenced through the nationwide #ThumaMina initiative”.

However, the ANC faction that opposed Ramaphosa’s presidency is armed with details on the party’s membership numbers in Mpumalanga having been inflated – details that would be used to challenge Ramaphosa and Mabuza’s election last year at Nasrec.

Mabuza was seen as a low-hanging fruit since he did not even enjoy the full support of many in the Ramaphosa camp.

Supporters of Zuma have never forgiven Mabuza after he “betrayed” them by urging his Mpumalanga delegates to vote for Ramaphosa at Nasrec, after initially pledging his support for their candidate, Nkosazana Dlamini-Zuma.

Although a court challenge against Ramaphosa’s election at Nasrec had not been ruled out, the matter was unlikely to make the cut on the urgent roll, which meant it could only be heard in 2020 at the earliest, with just two years left to the end of Ramaphosa’s first term in office.

A deputy president of the country other than Mabuza would undermine any arguments of him being “the entitled deputy”, and therefore the leading candidate to take over the ANC from Ramaphosa, as there would also be the country’s deputy president, who could make a similar entitlement claim.

A member of the ANC’s national executive committee (NEC) explained that saying Mabuza was not liked by “some people” in the Ramaphosa camp was an understatement.

“It is most of them because he was not even their candidate in Nasrec.”

The NEC member said it was “human” for the Zuma camp to feel that he had betrayed them.

However, it would be difficult to block Mabuza since the appointment of the deputy was the president’s prerogative, and those close to Ramaphosa’s “kitchen cabinet” were wary that it would be a risky move for him to pick a fight with his own deputy.

Also, said an insider, leaving Mabuza with a lot of time on his hands in Luthuli House could be “dangerous” because it would allow him to strengthen his base ahead of the next ANC election. “He will have more time in the deployment committee and go to branches. That guy knows the ANC like the back of his hand. He has a plan and he is always planning.”

A Ramaphosa loyalist said the president was following the matter, but “he has to know that you dump your deputy at your own peril”.

“You do not want to fight your deputy. Even if Mabuza features low on the list to Parliament, he must be the deputy of the country for continuity and stability.”

Although Mabuza had previously told City Press that he was willing to “sacrifice” any personal ambitions for the unity of the ANC, “he has to go to government and he wants to go because if he does not, then they will throw him under the bus”, said the loyalist.

City Press has learnt that the ANC in Mpumalanga had been instructed to align its branches properly, in accordance with the municipal demarcation system – and that this was likely to decrease its membership figures as the ANC’s second-biggest province after the pre-Nasrec audit.

“With the new [home affairs] system that allows banks access to identity documents, a membership audit picked up that some of the people in Mpumalanga did not even exist,” security insiders said.

The anti-Ramaphosa group was likely to use the new information “and the timing could be the next [ANC] national general council”, scheduled for mid-2020.

But there was a push to bring the council meeting forward, they said.

Mpumalanga ANC spokesperson Sasekani Manzini said the branches in the province had been realigned according to municipal demarcation, as per the instruction, and that membership numbers had not been affected.

“We do not know anything about inflated membership as the province,” she added.

But former ANC treasurer-general Mathews Phosa said there were 108 branches in Mpumalanga that were found to be fraudulent, adding that “it has not been fixed”.

Phosa said fraudulent members had participated in the Nasrec conference. He called for the ANC to address the matter speedily “to protect the integrity of conference”.

“The NEC must act, and those responsible must be held accountable,” he said, adding that Mabuza must explain the discrepancies because he was the provincial ANC chairperson going to Nasrec.

A security insider said it was “inevitable” that the ANC would be faced with court challenges to defend the integrity of its national conference. The ANC in the Eastern Cape also had problems with its provincial conference going to Nasrec.

“You get a sense that they are pushing something underground to destabilise Ramaphosa. Their level of confidence is scary and they continue dancing like nothing has happened. The confidence is also from out of the blue,” said an insider.

A senior lobbyist in the Ramaphosa camp said the explanation by those implicated in the plot about there being nothing sinister about the Durban meeting, “is implausible and the ANC NEC has to step up to the plate and take decisive action”.

“[Magashule] went to Pietermaritzburg [in KwaZulu-Natal] early this year and spoke about a five-year plan to return the ANC to the ‘right hands’, and the NEC did not act. This time, he cannot be let off the hook.”

Magashule was expected to be subjected to an interrogation at the next ANC NEC meeting. The matter would then be discussed, said the lobbyist, and NEC members would “come up with a resolution”.