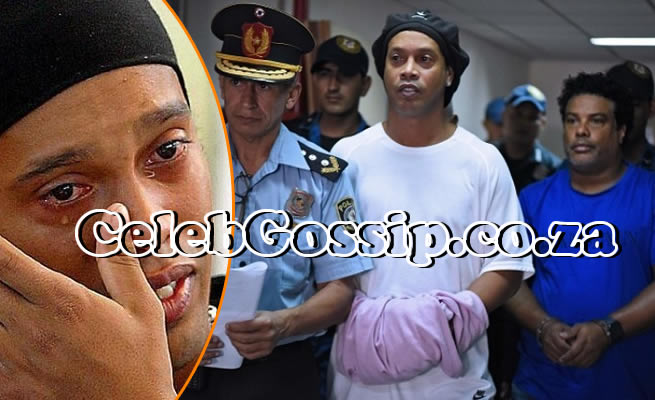 Brazilian football legend Ronaldinho won it all during his illustrious career, but now he is forced to showcase his insane talents on a lesser stage.

Ronaldinho, 39, is currently being held at Agrupacion Especializada prison in Paraguay for travelling with a fake passport.

He is also allegedly under investigation for further crimes.

But that has not stopped the former attacking midfielder from showing off his immense football skills with inmates and prison guards during a futsal match.

According to Paraguayan news outlet Hoy , Ronaldinho initially refused to take part in a prison tournament, but was eventually persuaded to play in a separate match when speaking to one of the guards.

Ronaldinho is believed to have been talking with one of the guards at the side of the pitch, before the players saw him and invited him over to play.

His team is thought to have won the game 11-2, with the Brazilian scoring five and assisting the other six goals.

The 2002 World Cup winner and his brought were arrested in Paraguay after allegedly being caught with fake passports last week.

The brothers were denied bail and house arrest, and were since taken to a Brazilian jail called Agrupacion Especializada, where reports in Brazil claimed he was able to compete in a tournament.

Now according to Paraguayan news company Hoy, the former Brazilian midfielder decided against competing in the prison tournament but was convinced to play in a separate match.

Though Ronaldinho did not enjoy his first few days in the prison, a prison ward explained how he is quickly adapting to life.

“In broad terms he is doing very well,” said Blas Vera, who works at Agrupacion Especializada.

“I see he is in good spirits, just like you see him on television, always smiling.

“Since yesterday he looks very well, he talks to his other inmates, he goes out to the patio.”

Polygamist Musa Mseleku of the small penis speaks on being the most hated man...

Entertainment Lee Nyathi. - 5 April 2020 0
Musa Mseleku is the viewers’ worst enemy on Mnakwethu, which has come under a lot of criticism from those who watch it. In the show,...

General News Lovemore Lue - 5 April 2020 0
Police minister warns public against fake videos and pulls no punches when it comes to alcohol prohibition laws, saying they should remain in place...

Faded Kaito star Msawawa who lost everything because of beer, women and sex now...

Celeb Gossip Muza Mpofu - 5 April 2020 0
Msawawa, real name Sboniso Dlamini, who hails from Clermont outside Durban, shot to fame with his classic kwaito hit track Wawungakanani when he was...