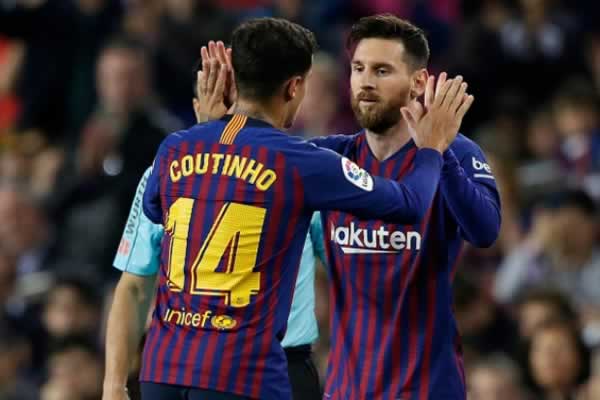 FC Barcelona superstar Philippe Coutinho has revealed what he told his wife after meeting with Argentine forward Lionel Messi for the first time.

The Brazilian joined the Catalan giants from Liverpool for a reported fee of £108 million (R1.7 billion) in January and has immediately impressed the club's supporters.

Coutinho has linked up well with the likes of Luis Suarez and Ousmane Dembele, and has now spoken about the first time he met the club's talisman, Messi.

The 25-year-old admitted he was nervous in the Argentine's presence at first, and even expressed his excitement to his wife after he had dinner with the 30-year-old.

"Luis and Leo are very close, and me and Luis knew each other from Liverpool, so it was Luis that organised the meeting," Coutinho told Sport.

"When you're by Leo's side, you're a little nervous, it was the same for me at Liverpool with (Steven) Gerrard.

"With Leo, I thought: 'You're with the best player in the world!', but I saw that he's an incredible person and he's super relaxed.

"When I got home, I said to my wife: 'Caramba! I have been eating with Messi!', and we both laughed our heads off, it was really funny."

Coutinho has represented the Blaugrana 22 times since his arrival, scoring 10 goals and assisting a further six strikes.