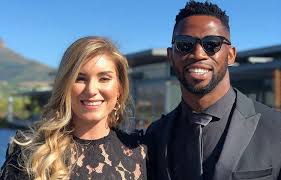 Siya Kolisi is one of the most celebrated Celeb in not only our country, but the sporting world right now.

Quite frankly he's a national hero!

And for some adoring fans and even groupies, he's also their celebrity crush.

But being a married man of four (he has taken his baby brother and sister into his care) hasn't stopped many an admirer – or should we say 'thirsty fans' – from thwarting their attention in Siya's direction.

And judging from past offences, his wife Rachel knows this too well!

They've also warned her NOT to check his DMS as it's likely to be very messy!

Rachel who shares children Nicholas and Keziah with Siya, has a reputation for publicly losing her **** when it comes to thirsty fans who gush over her man.

Rachel trended over the weekend following the boks win for this reason.

This is what tweeps had to say;

Let's all spare a moment to pray for Rachel Kolisi at this time. Siya's DMs are gonna be a mess.

On the flipside, many tweeps are stanning Rachel for being a real queen and holding her man down:

Guys please don't throw yourselves at Kolisi. Please let Rachel breathe. That woman held Siya down when yall weren't there.

Whether you're a fan or not we think Rachel Kolisi – and her marriage – deserves our respect!