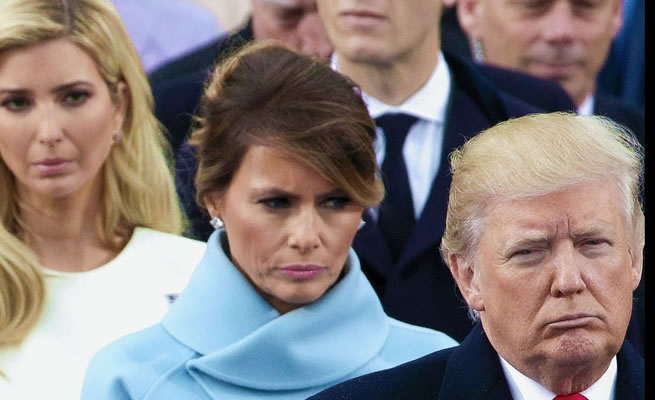 Donald Trump will try to deport FLOTUS Melania if she attempts to divorce him while he is president, a fired White House aide has claimed.

Omarosa Manigault Newman branded the president sufficiently ‘vindictive’ to try and banish his Slovenian-born wife from the US if she steps out of line during his term in office.

In her new book, Unhinged, Omarosa theorizes that a recent Trump Administration plan to strip citizenship from people who lied or cheated in their application could be used to target Mrs Trump. There is no suggestion the First Lady did either when she successfully applied to become a US citizen.

She explained: "Since Donald is fully aware of however she acquired her permanent citizenship, he could, if there were anything fishy around it, expose the methods and somehow invalidate it. He is a vindictive man, and I would not put anything past him."

In an excerpt seen by People, Omarosa has claimed Trump may have pulled strings to ‘secure or expedite’ an EB-1 Einstein visa granted to his ex-model wife which is normally reserved for those with ‘extraordinary ability.’

She continued: "If Melania were to try to pull the ultimate humiliation and leave him while he’s in office, he would find a way to punish her. This is a man who has said he could pardon himself from the Mueller investigation. Why not pardon himself over an alleged visa payoff?"

She added: "In my opinion Melania is counting every minute until he is out of office and she can divorce him."

President Trump has rubbished all claims made against him in Omarosa’s book, with his wife’s spokesman also insisting that the two women ‘rarely, if ever, interacted."

Omarosa met Trump while appearing as a contestant on the first season of his reality show The Apprentice in 2004. She began working as a communications officer in the White House in January 2017, but was fired from the job a year later.

International News Flaxie Mkhize - 1 August 2020 0
Malcolm MacDonald has a penis built on his arm. Malcolm MacDonald (45) from England lost his penis to a horrific blood infection. He has since become...

General News Skhumba Hlongwane - 1 August 2020 0
Deputy Finance Minister David Masondo has reportedly asked the ANC’s Integrity Committee for “further guidance” after it recommended that he should step down from...
Loading...