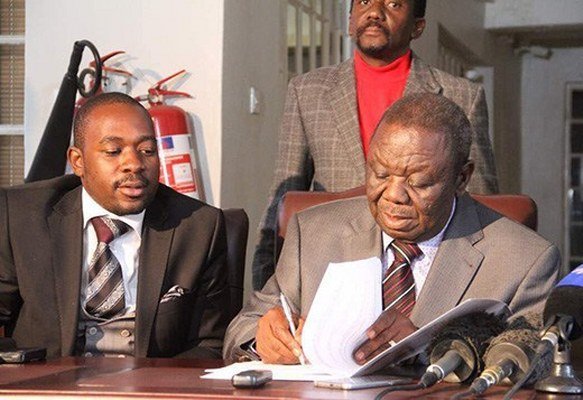 Chamisa told thousands of his supporters at a campaign rally at Chibuku Stadium in Chitungwiza that in killing Tsvangirai, Zanu PF did not anticipate that they were “rekindling a brighter flame that would consume them” in next week’s polls.

“I am saying this for the first time. There are people who connived to kill our leader Morgan Tsvangirai,” Chamisa said.

“They thought that if they killed him, they would weaken the party. Little did they know that they were rekindling brighter flames that would consume them? They are shedding crocodile tears, but we know they killed him.”

Tsvangirai succumbed to cancer of the colon in February this year, shortly after President Emmerson Mnangagwa and his deputy Constantino Chiwenga paid a visit and offered him a pension, pledged to pay his medical bills and gave him ownership of a government house he was staying in. Government later provided a State-assisted funeral for Tsvangirai.

The late main opposition leader had opened up on his medical condition on June 27, 2016.

His death triggered a fierce MDC-T leadership fight, culminating in the party’s split, with faction leader Thokozani Khupe leading a breakaway faction of the MDC-T, where she has successfully registered to contest next week’s presidential race using the party symbols and colours.

Chamisa claimed Zanu PF fuelled his succession fights with Khupe in order to further weaken the opposition party.
“They (Zanu PF) are right now disappointed, panicking and hopeless. They developed a parasite (referring to Khupe). Don’t supply it with fertiliser, it will destroy the country,” Chamisa said.

He said despite the setbacks, the opposition party had mobilised adequately to safeguard next week’s votes, with 44 000 agents set to be deployed to cover all polling stations.

“We should leave them no room for cheating. There are divisions in Zanu PF. They have disappointed (and) their old man (former President Robert Mugabe), he is very angry. This time, they don’t have their goalkeeper (Mugabe) and we are going to score at will.”

Chamisa said Mnangagwa was trying to cause civil strife by colluding with Zec to rig the elections.

“He has been telling me to go to the court if I have issues. How can he invite me to his bedroom?” he asked rhetorically.

Chamisa said he was working with war veterans like Zapu leader Dumiso Dabengwa to tap into their wisdom.

On the issue of land, he said resettled farmers should not be afraid because his government would not displace any farmer, but give them title deeds so that they settle on their farms permanently.

Chamisa said his government would change the governance culture of Zanu PF, improve education, the economy, labour issues and health.