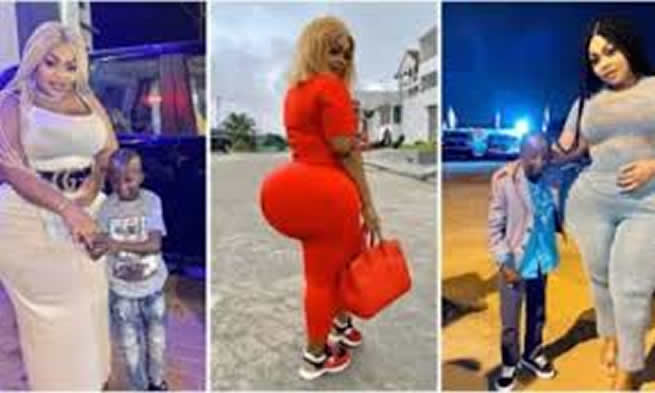 Plus-size model Eudoxie Yao has said that her relationship with Guinean musician Grand P is going very well. Eudoxie thanked people who are supporting her relationship and emphasized that physical size does not matter.

There's been criticism that the loved-up couple are only together for commercial reasons.

But there have also been nasty comments – too vile to repeat here – posted on social media after their pics have been shared with friends and followers.

Online trolls have rejected the relationship as a marketing stunt as the Ivorian and Guinean musicians are both celebrities on the continent.

And a clearly smitten Grand P has described the model as his 'baby' on Facebook.

Eudoxie Yao maintains that her relationship with the musician is strong, and that "size does not matter".

Taking to Instagram, where she boasts nearly one million followers, Eudoxie wrote: “We are happy together, and this is the most important thing.

"Thank you, everyone, for your support.

"The physical does not count in a relationship.”

However, despite his stature, the singer lives life to the fullest and recently surprised fans by entering into a relationship with the Ivorian model who he also plans to wed.

Before that happens though, a jealous Eudoxie appeared to warn her prospective fiance to stop playing the field.

Alongside a glamorous photo of the couple together, she said: “My fiance Grand P, you claim you want me as your wife.

"But it is always you who kisses your fans on the mouth.

"At this rate, my parents may refuse the marriage.

"Pull yourself together because I know you love me.”

Some fans, including Rosie Bonou, commented that they were a "beautiful couple".

The Ivory Coast-born social media sensation, dubbed “African Kim Kardashian”, claims to have the biggest butt in the whole of West Africa.

According to local media, Eudoxie’s sizeable bum has helped her rake in a small fortune.

Much like her idol, Kardashian, Eudoxie uses her unique look to sell events, photos, and promote products.

She is also a regular on African television programmes.