Home International News Hotel cleaner who stole a millionaire's used condom and impregnated herself is... 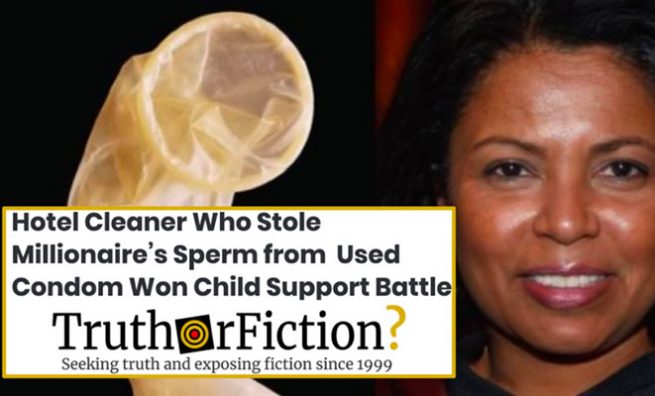 It sounds too good to be true, right?

A Las Vegas hotel cleaner hit the proverbial jackpot after winning a child support battle against a 28-year-old tech millionaire.

The case was an unusual one in the fact that the hotel cleaner, going by the name "Jane" and the unnamed millionaire, never even had sex.

According to www.thebreakingtimes.com, Jane was 36 when she stole a used condom from a then 24-year-old tech millionaire’s hotel garbage bin.

What makes the story even more unbelievable is that she inserted the semen inside her vagina and became pregnant with a baby boy who is now age four.

During the child support hearing, Jane confessed that she never slept with the young millionaire and that she impregnated herself with his sperm while she was cleaning his room.

“He left his bank statement on the nightstand in his hotel room and I saw it when I was cleaning, at the time I wanted a baby so bad and I thought it would be better if I had a baby with a rich man,” she said.

The court then ordered a paternity test and found that the man was the baby's father. He was ordered to pay the mother of the child $2-million (about R30-million) for the three years of his son’s life he missed.

Reddit users soon jumped onto the story. Some rubbished the story as fake news while others wanted to know how she managed to get herself impregnated.

"Made up article. No verifiable info. Garbage site," said one. Another commented: "That's my worst fear someone stealing my sperm and impregnating them selves."

On further investigation, verification website truthorfiction.com found that the story was indeed untrue.

"One was that it was shared as a screenshot of a purported article, without a link to any news stories. Another was that a cursory Google search led to stories primarily published outside the United States, when the hotel cleaner child support hustle supposedly occurred in Las Vegas," said the website.