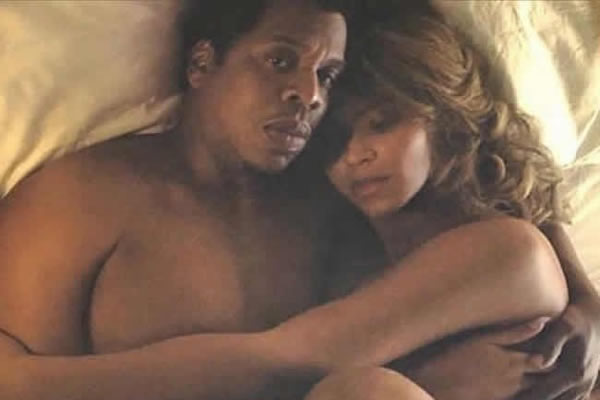 Power couple Beyonce and Jay-Z attended Game 3 of the NBA Finals on Wednesday night, sitting in courtside seats. At one point, the woman to Bey’s left leaned over her to chat with the singer’s husband.

It’s tough to make out the exchange, seen in an ESPN tweet that featured a 13-second video clip. The woman, Nicole Curran, is married to Golden State Warriors owner Joe Lacob, and later revealed to ESPN reporter Ramona Shelburne that the exchange between herself and Jay Z was actually about what he wanted to drink.

Curran says Jay Z asked for a vodka soda. She asked if he wanted lime with that. But it was loud in Oracle and she couldn’t hear, so she leaned over. That’s where the photos of Beyoncé looking askance at her come from.

But context was disregarded as the internet seized on the last few seconds of the clip: Beyonce’s smile fades, and the singer appears to brush against Curran’s shoulder while shifting in her seat. In the hands of social media users, the moment became a courtside drama about a mere mortal who audaciously invaded Beyonce’s personal space. (Spoiler alert: The singer did not approve of this breach of royal protocol.)
In TMZ’s version, Beyonce directed “epic side-eye” at Curran, whom Jezebel dubbed the singer’s “latest enemy.” “PSA: Do not Lean Over Beyonce,” Vulture cautioned.

Some of the discourse referenced the last time that video footage of the couple led to speculation about Beyonce’s reaction to those who would dare to wrong her (one tweet dubbed Curran “Becky with the good seats”). We know now that sometimes drama goes down when there’s a billion dollars on an elevator . What happens if there’s billions upon billions of dollars in a Bay Area sports arena?

Curran responded to her critics Thursday morning, posting a perfectly pleasant photo of her and Beyonce. “We should all help and support each other,” she reportedly wrote, before making her Instagram account private.

Jay-Z and Beyoncé are courtside for Game 3 😎 pic.twitter.com/6mmJuN8Odn

Meanwhile, Shelburne tweeted Thursday afternoon that she had spoken to Curran, who “was in tears” and reported receiving death threats over the courtside clip.

The ordeal speaks to the perils of internet vitriol and obsessive fandom, not to mention the risk of assuming the context of a conversation among three people. In a nod to good sportsmanship, we should all take the time to remember that it’s just a game.