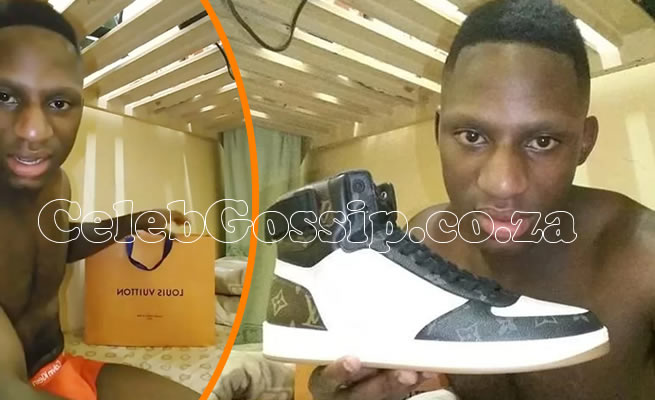 WHEN IT comes to being a skhothane, Tebogo is the king. He flashes his expensive clothes, designer shoes and bling lifestyle for all to see.

But he’s in prison. He shouldn’t own more than an orange suit and shoes! Tebogo Makena (25), who apparently lived in Mamelodi, Tshwane, before he found a home at the Kgosi Mampuru II Prison, likes posting his flashy lifestyle on social media.

Recently, he showed off his high-priced designer kicks. In a video seen on social media, Tebogo the inmate is praised by the fellow inmate taking the video. He opens an orange Louis Vuitton shopping bag and takes out black and white takkies.

“I don’t shop in Marabastad or the streets of Joburg. I bought this at U26 Upper Level in Sandton City,” Tebogo says, smiling proudly.

As seen in videos and pictures, Tebogo doesn’t eat a lot of prison food. He has All Bran Flakes for breakfast. His coffee? Jacobs Kronung. The water is boiled in a Russell Hobbs kettle.

In one of the pictures, he shows off his cellphone bill of R1,000!

It’s believed Tebogo is serving seven years in prison for hijacking and possession of stolen goods. It’s not clear when he was convicted. He’s not a favourite with Mzansi citizens who’ve witnessed the prison skhothane.

Tlhogi Sekhu wrote on Facebook: “I’d rather wear Small Street products in the streets than wear makoya behind bars.”

Innocent Raphasha wrote : “I can’t upload his picture here, but he bought a C63 while in prison. So I’m not surprised by this.”

“We’ll leave no stone unturned in dealing with this matter,” he said.

He said due to the seriousness of the matter, the department had immediately instituted an internal investigation.

“The investigation will also assist in ensuring that plans are in place to minimise the occurrence of similar incidents,” he said.

“If found guilty, the inmates could face criminal charges and this may result in an additional term of imprisonment. Smuggling contraband is one of the challenges the department faces. The department is working day and night to put together security strategies to permanently deal with this challenge.”

Monama said bringing contraband into a prison puts the lives of other offenders, warders and the public at risk.