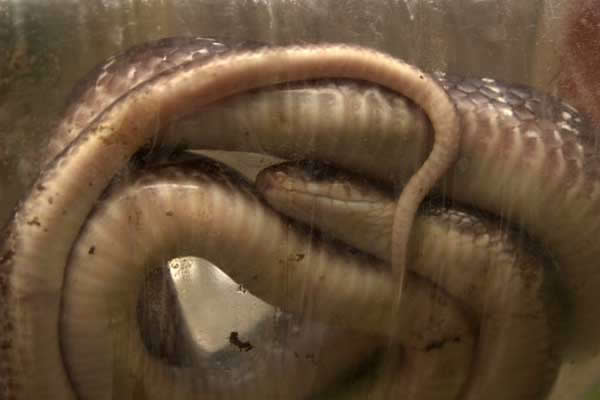 A SANGOMA gave Zodwa a baby snake in a jar six years ago to make her rich. But the snake no longer fits in the jar and it does the strangest things. Zodwa loves what her snake is doing, but she doesn’t want to be poor forever!

“I don’t want my punani licked. I want cash. The snake must go!” said Zodwa Ngubane (42) from Angelo, near Boksburg, Ekurhuleni.

She is still jobless and she lives in a mkhukhu. Instead of the snake making her rich Zodwa is still poor.

“I don’t want this snake anymore. I want to be rescued from it,” she pleaded.

Zodwa said six years ago she was desperate to get rich and improve her life but her get-rich plan didn’t work out.

“I heard that people got rich using snakes. I wanted to try my luck. I was broke and single. I needed money,” said Zodwa.

Zodwa went to a sangoma who gave her a small bottle of muthi. She was told it had a snake inside.

“The sangoma said it would only work if I didn’t have sex with anyone. I thought that was strange but I didn’t care, I just wanted money.”

But that night she started feeling as if someone was performing oral sex on her and she loved it. “I enjoyed every moment,” she said.

While the enjoyment continued, she soon realised that she was still broke.

“So the snake was for my sexual pleasure. I was having fun but the snake wasn’t going to buy me a house! I knew I would have to get rid of the snake so I could get a boyfriend and find another way to make money.”

Zodwa told Daily Sun she went back to the sangoma but he was nowhere to be found.

“Since then I have been going from one sangoma to another but the snake won’t stop,” said Zodwa.

Zodwa said she’s given up on the money but she really wants the snake to stop.

Sangoma Joseph Dungamanzi told Daily Sun this usually happens if the client does not follow all the instructions.

“Zodwa must have been asked to sacrifice one of her loved ones and she did not do that,” said Joseph.

Joseph said if you follow instructions properly you should be seeing change in your life within three months.

“I advise people to stay away from these remedies when they want quick money. There are other ways,” said Joseph.