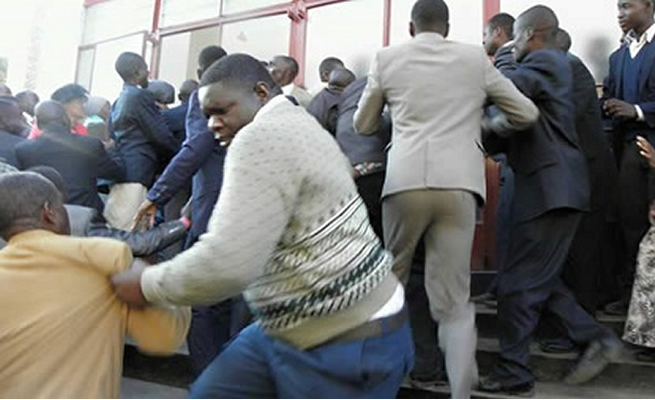 A four-day conference at one of Southern Africa’s biggest churches started on a chaotic footing yesterday as bullets flew and cars were smashed as congregants ran for their lives.

The mayhem at International Pentacostal Holiness Church (IPHC) in Zuurbekom, southwest of Johannesburg, saw up to 12 cars damaged. Despite the fighting, only one person was confirmed injured. He was shot in the shoulder as he tried to move his car.

The church’s colourful uniforms were scattered around at the scene, with some hanging from the windows of one of the damaged taxis outside. As the rain started falling, some men from the IPHC began gathering what was left of their belongings following the morning shootout between rival members of the church.


The fight at IPHC headquarters began after groups of men from Limpopo, Mpumalanga and Mozambique had just arrived.

Gauteng police spokesperson Captain Mavela Masondo said a group of church members were prevented from entering the church whose entrance was blocked with big trucks.

“The first group was confronted by another group that was already in the church. An argument ensued between the two groups and shots were fired. The second group ran away as the other group allegedly smashed their cars. We managed to confiscate firearms that will be sent to ballistic tests. We have opened a case of attempted murder and malicious damage to property,” Masondo said.

The church has been experiencing internal fighting since the death of its leader Glayton Modise in 2016.

Church members have been at loggerheads over which of Modise’s children should succeed their father.

A 50-year-old man who lives close to the church said the first group had arrived on Wednesday night.

“On Wednesday the street closer to the church was blocked with big trucks. Today [Thursday] I heard people singing church songs just after 6am and I went outside to see what was happening. The two groups met and it looked like they were negotiating. Just after 7am shots were fired which lasted for about five minutes. People started running in all directions but I don’t think they wanted to harm them, it was just to scare the other group,” he said.

A 56-year-old member from Middelburg said his group was told it did not have the permission to enter.

“They started throwing stones at us before firing shots. At that moment I thought I was going to die. I lost my clothes in that chaos,” he said.

Other members also lost their luggage in the violence.