Home General News Mourners surprised over 'wedding' at a funeral, thanks to Brothers and Sisters... 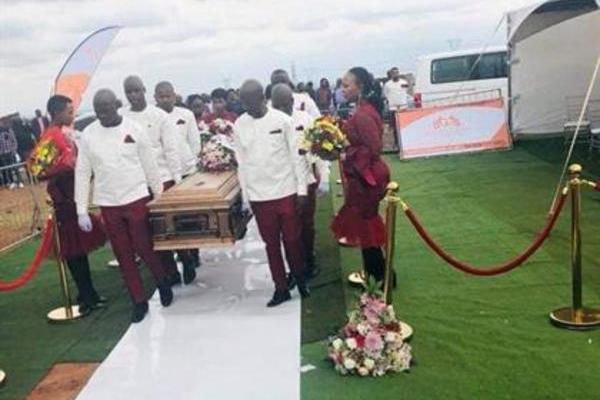 MOURNERS came from far and wide to say farewell to a loved one but when they arrived at the cemetery, they were surprised.

Some even thought they were lost, but they were definitely at the right place.

The funeral to die for took place in Soshanguve block GG, Tshwane at the weekend.

The event, so colourful that many were fooled into thinking it was a wedding, was the work of Brothers and Sisters Funeral Parlour.

The family walked on a white and red carpet into the cemetery.

The coffin had its guard of honour with ushers, who were part of the funeral parlour’s team, dressed in matching uniforms as if they were bridesmaids and groomsmen.

Music was also part of the day and food and drinks, including alcohol and cold drinks, served.

A bar was also erected among the dead.

The funeral parlour said they gave the family a dignified and personalised funeral.

Phenina said they realised in 2014 that many people didn’t make an effort when burying their loved ones.

“We often consult families and find out what the dead person liked and how they lived their life. The burial should be a celebration of that life,” she said.

Social media was abuzz after news of the fancy funeral spread.

Mantsheuwa Mofokeng wrote on Facebook: “Business people and entrepreneurs are advised to be creative and innovative to attract the clients and grow their businesses. This undertaker did exactly that. Apart from the bar – job well done.”

Lindo WakwaSithebe wrote: “It’s nice, but not for me. We’re going to see more of this because we’re always trying to keep up.” Mzomhle Gilani wrote: “This is so beautiful. I love it.”