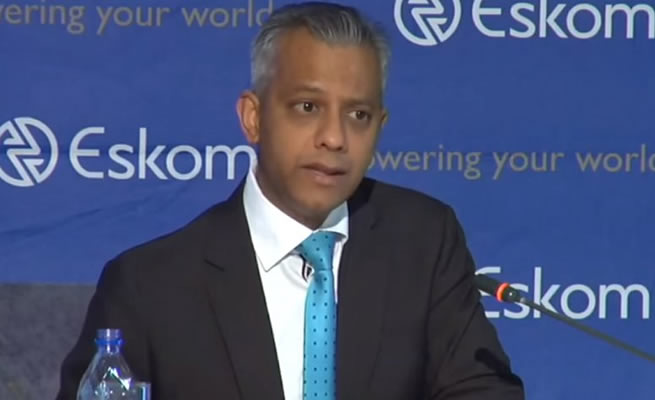 A draft Treasury report on its ongoing investigation into state capture reveals the extent to which the Gupta family’s lieutenants bent over backwards to help them loot Transnet and Eskom.

The report, the second of its kind during the investigation and dated July 2018, contains new information about alleged dodgy dealings by former Eskom and Transnet chief executive officer (CEO) Brian Molefe, his chief financial officer (CFO) at both companies, Anoj Singh, former Eskom chairperson Ben Ngubane and their officials.

It also reveals that multinational advisory firm McKinsey paid for Singh to go on lavish international trips to Dubai, Russia, Germany and the UK, after which their contract with Transnet was massively extended.

They were also given remote access to emails of Molefe, Singh and current Transnet chief executive Siyabonga Gama.

The report sheds further light on alleged wrongdoing regarding Transnet’s 1 064 locomotives tender, which ballooned from R38.6 billion to R54 billion and which saw the Guptas and their lieutenants score more than R5 billion in kickbacks.

It also provides a painstaking account of the 10-year, multibillion-rand coal supply contract irregularly handed to Tegeta Exploration and Resources, in which former president Jacob Zuma’s son, Duduzane, had a significant stake.

Investigators sent questions to Molefe, Singh, former Eskom chair Ngubane and Koko, as well as to McKinsey, but “we had not received the majority of the responses”.

The draft report found that Singh received six suspicious deposits totalling R16 million into his bank account in a single month: July 2016, when he was Eskom CFO. Among the payments was one of R9 million and another of R5 million – both described as telephone banking transfers.

“It is not clear how Singh accumulated [a] balance of R19 million that was in his account. It is also not clear why he transferred R16 million on July 14 2016 into two other accounts,” the report states.

“The amounts in Singh’s accounts will form part of the information we will hand over to the head of the Directorate for Priority Crime Investigation [DPCI] for further investigations. The DPCI will have to investigate whether some of these amounts may have been paid [to attorneys] for services rendered or procurement of valuable assets. They will need to further investigate what are the sources of money that accumulated to a bank balance of R19 million.”

THE DPCI IS THE FORMAL NAME FOR THE HAWKS.

The report also found that in 2012 and 2013, while he was CFO of Transnet, Singh went on two overseas trips at McKinsey’s expense.

The report states that a day after the recommendation to increase McKinsey’s fee for its advisory services on the 1 064 locomotives tender from R25 million to R49 million in February 2012, “an email, titled 2012 CFO Forum–Invitation”, was sent to Singh, inviting him to London for a conference of CFOs in June.

McKinsey, the report found, facilitated Singh’s eight-day trip, including securing him a visa for Dubai and accommodation at London’s five-star hotel, The Langham, as well as at the Sheraton Frankfurt Airport Hotel.

McKinsey responded to investigators by stating: “Mr Singh travelled to London to attend the CFOs’ forum, a widely attended annual event that McKinsey has hosted since 2003, attended by dozens of prominent CFOs in different industries from around the world.

“McKinsey does not have additional information regarding Mr Singh’s one-night stay at the Sheraton Frankfurt Airport Hotel upon departure from London, but we understand that … [he] met with one or more additional financial institutions in Dubai – which McKinsey also helped to arrange – before returning to Johannesburg.”

A month after Singh returned from the McKinsey-sponsored London trip, “there was a further procurement process to appoint McKinsey to provide advisory services to Transnet for the procurement of the 1 064 locomotives”.

“We determined that a Transnet Acquisition Council meeting was held on July 18 2012 [barely a month after Singh came back from the London CFOs’ conference trip on June 16] and that it recommended that consideration be given to the business being awarded to the overall highest-ranking bidder i.e. McKinsey & Company… [and] that approval be obtained from the group chief executive [Molefe],” the report states.

The following year, Singh again attended the CFO conference and McKinsey booked his flights, this time via Moscow. McKinsey confirmed to investigators that it arranged the trip, saying: “Singh took part in meetings that McKinsey helped to arrange with rail and energy companies and financial institutions, among other large companies. McKinsey’s understanding is these meetings were focused on capital execution and capital projection acceleration for Transnet, and that they took place between June 8 and 13 in Germany, Dubai and Russia.”

Singh, the Treasury report found, did not only allegedly help McKinsey; he also allegedly assisted Regiments Capital – of which controversial Eric Wood was a founder – to become McKinsey’s South African partner for the tender by recommending that Nedbank Capital be axed over a conflict of interest. The report further states that Regiments was appointed after Nedbank Capital was removed, and McKinsey’s contract value increased “from R35.2 million to R267 million”.

“Various addendums were concluded between Transnet, McKinsey and Regiments which resulted in the contract fee increase from R35.2 million to R267 million,” the report states. “The increase … was due to scope extensions over a period of 12 months. There is no evidence of proposals submitted to justify the various scope extensions.”

“We determined that Transnet paid a total of approximately R3.1 billion to McKinsey, Trillian and Regiments. The said payments were made from the time McKinsey was appointed at Transnet in 2005 to 2017,” the report states.

The report also found that China South Rail (CSR), the company which reportedly paid more than R5 billion in kickbacks to Gupta-linked companies, received astonishing preferential treatment by Transnet employees to the disadvantage of other bidders.

Lindiwe Mdletshe, Transnet’s executive manager for sourcing, even emailed the company the bidding documents before it had paid for them, in violation of Transnet’s rules.

CSR should also have been disqualified after the first round of bidding, for scoring a broad-based black economic empowerment score of 0, for having no local partner. The report states that Gama, then the CEO of Transnet Freight Rail, and his procurement head, Thamsanqa Jiyane, motivated to keep CSR in the race despite their abysmal score.

But perhaps most egregious was a letter Molefe received from Wang Pan, a CSR director, who “thanked Molefe for providing CSR with the opportunity to participate in the tender … and requested meetings between CSR and Molefe, to discuss cooperation …; Transnet Engineering to discuss and optimise the technical specifications; a site visit on some locomotive depot or engineering factory to study existing electric locomotives and investigate the operational conditions; and visits and discussion with some potential or preferred companies who are capable of cooperating with them.”

The report found that “Transnet should have disqualified CSR for what is clearly an attempt to influence and sway the adjudication in their favour. It is not clear how CSR would want to ‘discuss cooperation’ with Transnet before the tender is even awarded, unless there was something they knew at that stage of the tender process.

“Molefe, Gama and Jiyane’s actions exposed Transnet to potential litigation and reputational risk, should other tenderers become aware of this irregular changing of the evaluation criteria,” the report states.

The report details how Koko allegedly tried to ensure that the Guptas’ Tegeta retained its coal supply contract, despite supplying inferior quality coal at inflated prices, and delivering much less coal than the contract stipulated.

Koko, the report found, allegedly demanded a private meeting with an official responsible for testing the Guptas’ inferior coal. The report said the official told investigators “that Koko started the meeting by introducing himself as Eskom’s group executive and asked [him] why he is fighting with the Gupta family, to which [he] responded by stating that he does not understand Koko’s question, and further, that he does not know who the Gupta family is”.

“Koko informed him that Brakfontein [coal mine] is owned by the Gupta family and that [he] is fighting with them by providing unfavourable coal analysis results performed on Brakfontein’s coal.”

Responding to investigators, Koko denied making any threats to the official.