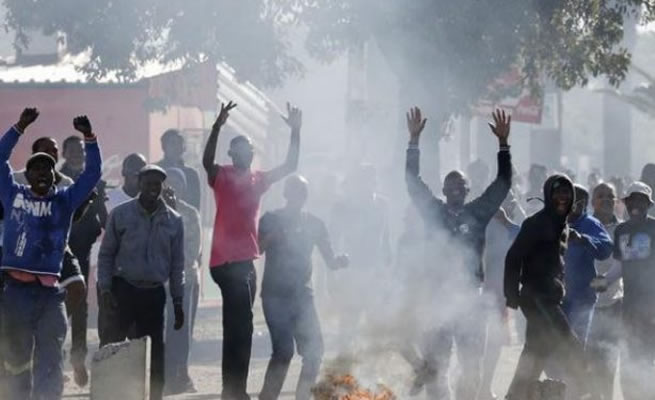 These words will forever ring in the head of a grieving Tembisa mother whose son was shot dead allegedly by an Ekurhuleni metro police officer during a violent protest that left four people dead.

Pheta Molonyama, 43, and another victim whose identity we are withholding, were shot allegedly by metro police officers after chaos erupted in the township over electricity tariffs. It was not immediately clear if the cops were using rubbers bullets to disperse the crowds.


A municipal building – the Rabasotho Customer Care Center, was broken into with protesters looting toilet papers, furniture and grass cutter before they set part of it alight.

TV screens, fridges, computers and at least 15 cars and two tractors were also torched. Two ATMs that were inside the centre were also tempered with, one had money stolen from it.

Two men were killed when a gas cylinder exploded when they tried to bash an ATM with it to blow up.

Journalists who tried to take pictures and footage were intimidated and had stones thrown at them.

Pheta was gunned down along Rev RJT Namane Drive just 30 minutes after he left the house. His mother Johana Molonyama, 72, said she was called around 6.42am by her neighbour who informed her that her son had been shot.

“I found my son lying on the ground with a bullet wound in his back and an exit wound in the chest. He was clearly trying to run away, so why did they kill him,” the distraught mother asked as she hovered over her son’s body.

“Not far from there [scene] the EMPD (Ekurhuleni metro police department) nyala that I was told had been involved in the shooting was still there. I went to the window and knocked on it, when the window rolled down I asked the white man that was in the driver’s seat if he had shot my son and he responded, ‘Ja, ek het hom geskiet’.

“When I asked why, he rolled up his window and tried to run me over with his car. I saw his face, I would be able to identify him,” Molonyama said. She said she was heartbroken and wanted answers.

At 10.30am when the news crew arrived to find Pheta’s lifeless body, it was covered with a brown blanket. It was only an hour that paramedics came to the scene, his body had been lying at the street corner for nearly five hours.

Protesters blocked main roads, preventing cars from getting in or driving out of the township.

They demanded that Ekurhuleni mayor Tania Campbell address them on issues relating to high electricity tariffs and exorbitant rates and taxes.

Plans about the protest have been simmering since last week, with residents claiming that their township was made to pay more for electricity compared to other townships.

A few kilometres away from scene where Pheta’s lifeless body was, in the Rabasotho section, a second person was killed.

Beverly Masinga, 51, on Monday told Sowetan of how she witnessed the killing of a 52-year-old man in their yard around 10am.

Masinga said a police officer leaned against the boundary wall and shot directly at the man at a house along George Nyanga Drive, right opposite the customer care centre.

“We were standing in the yard, watching as people were burning items when the officer aimed at him and shot. We ran and some tried to help him as he was bleeding but he died on the spot. I don’t know why they shot at us in our yard when the violence was outside.”

A member of the Tembisa Community Forum, who did not want to be named, claimed residents in Tembisa were paying high electricity rates as compared to other parts of the municipality.

“We demanded that we get our services directly from Eskom because areas that are serviced by Eskom get value for their money. In Ivory Park, when the residents there buy electricity for R100 they get about 60 units, here we get 40 units, that’ sa rip off,” he said.

Ivory Park, which neighbours Tembisa, falls under Joburg because of being part of greater Midrand area. The electricity tariff there increased by 7.47% while Ekurhuleni’s went up by 9.61%.

EMPD spokesperson ChiefSup Kelebogile Thepa’s phone went unanswered and messages sent to her were not responded to by deadline yesterday.