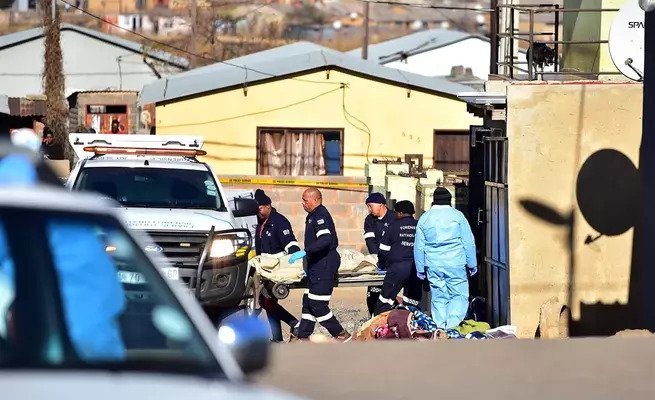 The number of people killed during the Mdlalose Tavern shooting early on Sunday morning, 10 July in Lahlumlenze in Orlando East, Soweto, has risen to 15.

Gauteng Police Commissioner Elias Mawela said around 12:30 police were notified of a shootout taking place at a tavern in Nomzamo Park. On arrival, police said they found that a 9mm high calibre firearm had been used as several cartridges were found on the scene.

"We believe that there must have been more than one shooter, at this stage we don't know what the motive for the shooting was, but I can say that the scene looks like the shooters came here with an intention to kill but randomly so," said Mawela.


It is alleged that on Saturday night at 20:30, a group of people were having drinks at a tavern at Sweetwaters in Pietermaritzburg when a vehicle arrived and parked outside the tavern.

Two males jumped out of the vehicle, entered the tavern, and fired random shots at the patrons. Police said cases of murder and attempted murder had been opened for investigation at Plessislaer SAPS.

The docket has been transferred to the Provincial Organised Crime Unit which will take over the investigation.

Both incidents come just weeks after the Enyobeni Tavern tragedy, a shebeen in East London, Eastern Cape, where 21 people died on 26 June.

The National Liquor Traders association spokesperson Lucky Ntimane said taverns are suppose to be, "… safe spaces patrons are able to socialise and enjoy their alcoholic beverages in a safe environment.

Ntimane said:
Taverns provide a livelihood for thousands of township business men and women and are an important component of local township economies. The targeting of taverns is particularly concerning as they provide social enjoyment for many people and this incident puts further pressure on a sector which has been hard hit during the Covid-19 lockdowns.

He said the association is deeply concerned about lives being lost in taverns and said, "… we call on police to investigate fully the circumstances that led to this tragedy," added Ntimane.

"[These] recent mass killings in taverns is yet another reason why programmes to address alcohol drinking must continue. We have been hard at work with police to educate people on the dangers of alcohol," said Mokoena.

She said some of the liquor traders don't belong to associations and this is of great concern because then these local liquor places can do what they like, and close when they want to.

"Those that don't belong to associations don't have rules, so they can sell alcohol to anyone who comes to buy, even if it's underage children, and that is of great concern for me. We need government to seriously intervene in this situation where we have people randomly coming to shoot at local taverns. It cannot continue, we cannot simply allow this to become the norm," said Mokoena.

Mokoena said the aftermath of what happened at the Enyobeni Tavern in the Eastern Cape still has many unanswered questions as to why children as young as 13 were drinking alcohol.

"When we spoke to some of the survivors they said that they did not buy alcohol it was offered to them. That begs the question as to who was supplying the liquor and why? The owner of that tavern was wrong for allowing that kind of event to happen at his tavern and he most certainly did not abide by the liquor laws. We now know he is also not part of any liquor association. If many of theses local taverns had belonged to an association then I do think these random killings inside taverns could be prevented because we have rules and regulations that are very important to abide by," said Mokoena.

Mokoena said when there are liquor association meetings there is a code of conduct 'bible' that says, "… you don't sell to underage children, to pregnant women, to intoxicated people, and close the shop on closing time", which members sing out to each other.

"People that don't belong to associations don't abide by the rules, if they did, taverns would be closed at certain times and possibly none of these senseless killings would've happened," she added.