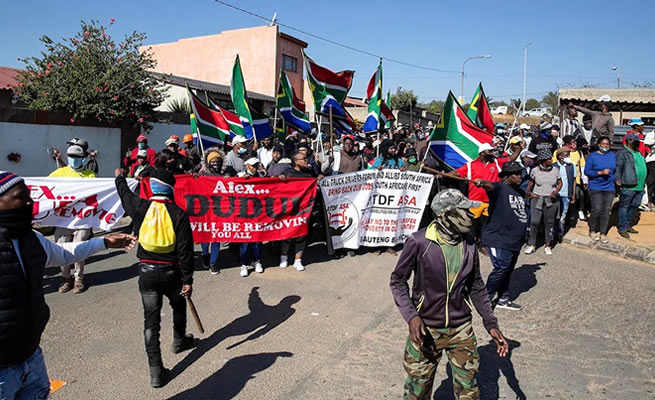 In a desperate move, a group of foreign nationals have approached the Johannesburg high court for relief against the so-called Dudula campaign targeting self-employed foreign traders, stating the court bid will prevent loss of life in case xenophobic violence flares up.

The urgent court application is expected to be heard on Wednesday and follows numerous waves of the controversial Dudula campaigns in Gauteng townships which saw violent clashes in Alexandra last week, resulting in five people being arrested.

The Dudula groupings' operations which are aimed at rooting out illegal foreign nationals whom they accuse of taking jobs in South Africa at the expense of locals, started in Soweto last year but have since spread to Alexandra, Ekurhuleni townships of Tembisa and Daveyton and the inner Johannesburg, including Hillbrow and Orange Grove.

In an urgent application before the Johannesburg high court, 38 affected foreign nationals approached the court for an order seeking to put a stop to the movement's activities which include forcing them to shut down their stalls in various townships of Gauteng.

Foreign national Sipho Ncube filed the founding affidavit pursuing the court to interdict the Dudula operations which include assaults, threats and interfering with businesses owned by foreign nationals.

Ncube is among a group of foreigners which include recyclers, motor mechanics, fast food vendors and some who are unemployed from countries such as Zimbabwe, Zambia, Malawi, Lesotho, Swaziland and Mozambique.

Ncube, a victim of the Operation Dudula's activities, also wanted the court to interdict members of movement to stop from organising and participating in protests at stalls operated by foreign nationals.

“I have been threatened not to return to my workshop in Johannesburg on 12 March 2022 [or else] my stock will be destroyed and stand to be harmed, if not killed,” stated Ncube in his affidavit.

Last week, at least 10 people were injured during the violent standoff between Alexandra's Dudula Movement and foreign nationals who resisted attempts to have them removed and blocked from vending in the township.

This followed similar campaigns aimed at forcing undocumented foreigners out of informal trading in townships intensified in the Johannesburg CBD, Hillbrow and Orange Grove.

Ncube stated that their rights to be free from cruel and inhumane treatment which were infringed by the group gave rise to the matter being “inherently urgent”.

“This application raises constitutional rights of manifest importance… It is about stopping violence, threats, harassment and unlawful interference without business operation at the hands of thugs…

“It is uncontroverted that this matter is of national importance that the violence, threats… and intimidation is stopped. Otherwise the country could experience another bloodshed of xenophobic violence,” stated Ncube.

He stated that loss of life was likely to happen if the movement's activities were not stopped immediately as the circumstances of this case are exceptional.

“There were already violence, injuries, threats and intimidation at the hands of the movement. At present, the movement is law unto itself,” stated Ncube.

He stated that the importance of safeguarding and vindicating their rights cannot be undermined.

“The pressing public need to bring to an end the destruction of our businesses, intimidation and violence at hands of the movement is invariably urgent,” stated Ncube.

He also stated that members of the Dudula campaign have not proven that those that they have targeted are illegal immigrants or were involved in illegal activities.

Lawyer Mabu Marweshe said: “We've been approached by foreigners, some of them are victims of Operation Dudula activities, to launch an application on an extremely urgent basis. We expect the court to rule on it on Wednesday morning.” – Work in South Africa