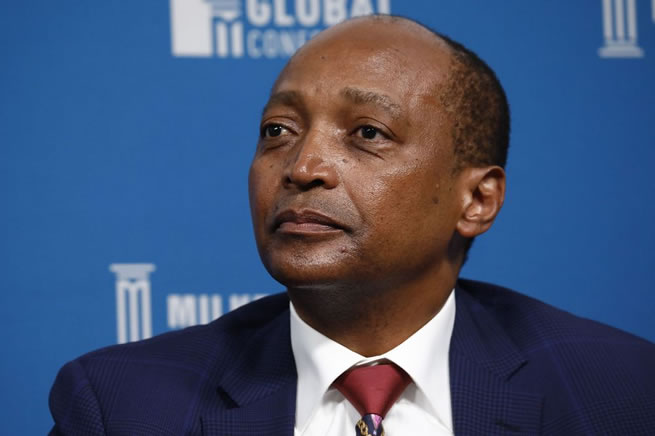 Mining billionaire Patrice Motsepe’s name has been dragged into a storm involving allegations of sexual harassment and assault levelled against his senior company office at his Jse-listed company African Rainbow Minerals (ARM).

The company’s former protection service administrator, who cannot be named for legal reasons, has opened a case of sexual harassment at Bramley police station against ARM’S head of protection services, Garth Roberts, who allegedly showed her his half-naked pictures on his phone.

She has also opened a case of common assault at the same police station against the company’s executive HR manager, Buhle Mashiane, for allegedly poking her on the forehead.

The former employee has also filed a lawsuit at the Joburg High Court against Roberts for sexual harassment and ARM for failing to protect her against the two executives.

In a police statement,  the 41-year-old employee, who joined Motsepe’s company in 2015, said she was redeployed to work under Roberts in the company’s protection services unit.

She detailed an incident in 2019 in which Roberts told her he was investigating an employee for credit card fraud.

“I then asked why [the employee] would steal since he earns quite a substantial amount of money. He then turned and told me that ‘you black people you go out there and pomp and pomp then come back to work and say you want more money’. What was shocking to me was that [the employee]is not black he is coloured,” reads her statement.

She said Roberts told her he once dated a black woman at a mine and after having sex with her, “I would use a horse pipe and put in her vagina to clean out all the crap (sic).”

“To try and affirm this, he showed me a picture of himself half-naked,” reads the statement.

She further said Roberts also stalked her. “There were times when I felt I was being followed,” she said.

She also said on August 29 2019, Mashiane attacked her in their offices. This after accusing her of spreading rumours that she stole 20 company laptops.

“Ms Mashiane was walking on passageway from the side of the boardroom carrying a bag and she was on the phone. Ms Mashiane then decided to return after a few seconds after she has passed as we thought she had gone to her office but she came straight at me to say ‘you say I have stolen 20 computers’.

“At that point, she was screaming at me and pointing at me so close I could feel her breath and spit on me, that is how close she was,” reads the statement.

In the papers, the woman is demanding R600 000 from Roberts and ARM, R400 000 for being exposed to indecent material and humiliation by Roberts, and R200 000 for conducting an investigation that invaded her privacy.

“The first defendant’s indecent and unlawful exposure of inappropriate photographic material to the plaintiff caused humiliation and degradation to the plaintiff’s person, her dignity, and as a result of the impairment of the dignity the plaintiff suffered damages in the amount of R400 000,” state the court papers.

“The investigations tampered with the plaintiff’s mental or emotional wellbeing, and as a result of which the plaintiff suffered damages in the amount of R200 000.

Before filing the lawsuit, the woman’s lawyers wrote a letter to the CAF president (Motsepe) and the board of ARM pleading with them to intervene.

But the company’s lawyers wrote back and said it will defend this matter.

The letter reads in part: “We set to follow some of the mistreatments and/or harassment that our client has endured since her joining the company and which, despite numerous attempts to have resolved, have gone unattended.”

ARM spokesperson Jongisa Magagula said the company would defend the actions brought against it by the woman before the relevant forums.