A witness has told of how the men accused of the murders of a 13-year-old girl and her 15-month-old cousin fought for the body parts of the teenager, who was living with albinism. 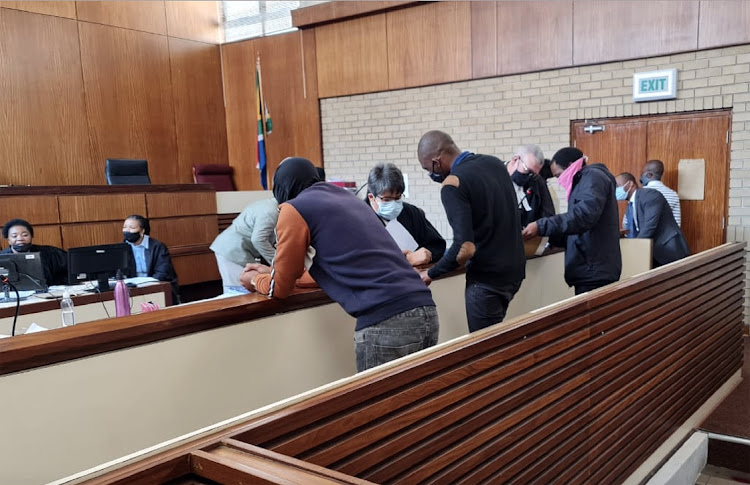 The case took a turn on Wednesday when John Magutshwa took the stand in a trial within a trial and told of how Thokozani Msibi and his friends shared Gabisile Shabane's body parts and argued over who was more deserving to take her head.

Three men – Msibi, Knowledge Wenzi Mhlanga and Brilliant Mkhize – are on trial for the January 2018 murder of Gabisile and toddler Nkosikhona Ngwenya.

Magutshwa, a sangoma, said Msibi was his friend and they had previously had a discussion about how he (Magutshwa) wanted to be rich like Msibi, who owned a farm and “nice” vehicles.

He said Msibi told him that he could assist him to become rich and enhance his business by harvesting albino body parts.

Magutshwa said one day he went to visit Msibi at Emalahleni and then Msibi took him to a shallow grave where he had buried Shabane.

“I went with them and Msibi took me to the bushes in Cullinan, near Pretoria, and showed me a grave which he said had the body of a girl who lived with albinism.

After Msibi showed me the grave, I took a knife and was told to cut the head and the hand off, which were later stored in a 2.5-litre bucket.

“They (Msibi and Gamedze) argued and fought for the body parts until I reminded them that the police would bust us if we did not cover up the grave and leave the area,” Magutshwa said.

Magutshwa added that some time later, Msibi called and asked him (Magutshwa) to visit him in his home, where he showed him an assortment of muthi paraphernalia. He also showed him a bottle that contained body parts.

“He said the bottle contained a heart, private parts and fat that he harvested from a person living with albinism.

“He told me that he and his friends had gone to Hlalanikahle, broke into a house and kidnapped a person living with albinism,” Magutshwa said.

Mhlanga on Wednesday told the court during cross-examination that police gave him a version of events into the murders.

Mhlanga said he was severely assaulted by police during interrogation.

“I was told what to say… that I went to Hlalanikahle (in Middelburg) with Msibi, who is a witchdoctor, and two other men, kidnapped the two children and then threw the 15-month-old baby into the river along the way before going to Msibi's house with the teenager to harvest her body parts for muthi purposes,” he said.

Prosecutor Ntsika Mpolweni said Mhlanga was going back and forth to try and convince the court to believe his version of the story which does not corroborate with what other witnesses said.

The trial has been rolled over to today.