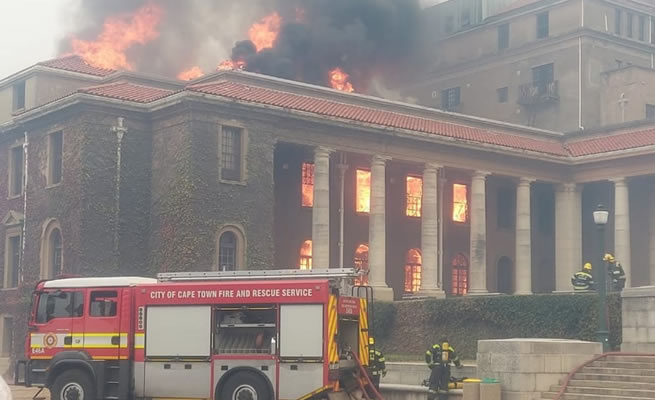 Cape Town – A local man has described how city residents came together to apprehend a suspect that allegedly started one of the fires, which have largely been contained on Table Mountain.

Road closures were still in place on Tuesday morning, with more than 150 firefighters and volunteers, and over 30 firefighting appliances remaining on the ground to monitor flare-ups, with the fire spreading higher up on the mountain. Flames above Newlands Forest, near Maclear’s Beacon, were visible from Constantia this morning.


The City of Cape Town has urged City Bowl residents who have been evacuated not to return to their homes yet, with the area filled with smoke.

"The fire has been largely contained, with firefighting efforts now focused on Deer Park and the Disa Park towers in Vredehoek," the City’s Fire and Rescue Service said in a statement.

"Crews have worked tirelessly and the wind having died down considerably has given them some respite. Fresh crews and seasonal firefighters will be deployed to those hot spot areas at 9am today."

Police confirmed they arrested one person on Sunday night, hours after the initial blaze broke, when a resident witnessed three people making a fire. The two other suspects managed to evade arrest.

Yazeed Evans, who was involved in the arrest of the suspected arsonist, told the Cape Times yesterday that he was having a meal with his family. As they all watched the fire burn towards the top of Table Mountain, they saw another blaze, closer to their home, spark.

“We were watching the fire right up the top of the mountain, it was quite far from us and all of a sudden my wife saw another big fire that started near our house. We went out onto the deck and saw how a fire just started. It was unusual, and we then noticed another fire starting and we saw three people in front of the fire.”

“Other neighbours were also screaming at them, so I decided to try and stop them and by the time I got ready they already started fire.”

Evans said he, his son and two dogs, ran towards the fire.

“I then found a man who was around two metres away from the fire. I told him to stop, I only had a torch with me. I called the police and the security guard came up and we escorted him down to the police near the road. He was arrested,” said Evans.

Police spokesperson Andrea Traut said: “A 35-year-old male was arrested (Sunday) night at 8.10pm in Philip Kgosana Drive by a member of the City’s Law Enforcement on a charge of arson.

“It is alleged that a member of the local neighbourhood watch witnessed three suspects making a fire on the mountain, and alerted authorities. Two of the suspects managed to evade arrest.”

At least 400 hectares of wild land has been destroyed so far while eight structures have been damaged or destroyed including major heritage sites in UCT’s African studies library, Rhodes Memorial Park’s restaurant and Mostert’s mill, along with vast tracts of land.

“We cannot replace the treasures of scholarship we have lost, but we can create new treasures out of our own scholarship. In the same way, each of us can rebuild our own sense of purpose out of this tragedy.

"To do so, we need to help each other. This is a team effort, and I convey my sincere gratitude for the commitment and help that you are all giving in the interest of UCT.”

Higher Education, Science and Innovation Minister Dr Blade Nzimande has commended the response by the UCT Council and Management to find alternative accommodation for 4000 affected students and their decision to suspend all the academic activities while the university assesses the situation and damage to its property.

“The African Studies Library houses the African National Congress archives and records of the underground publications. This library is also repository of the Bleek Lloyd collection of recorded stories and notebooks of their engagement with the /Xam and !Kun Cape San people of the mid 19th century, as well as original copies of pioneering isiXhosa newspapers like Imvo ZabaNtsundu, amongst others,” said Minister Nzimande.

Nzimande has directed Higher Health to work with other emergency relief agencies to offer students debriefing support and that Higher Health’s mobile clinic and psychologists support the UCT in-house team for psycho-social services in order to further support students.

Public Works and Infrastructure Minister Patricia de Lille said one minister’s Cape Town residence in Newlands (owned by the department ) was completely destroyed by the fire on Sunday afternoon.

“(On) Monday, family members of three members of the executive have been evacuated from Walmer Estate properties as there was an immediate threat Monday morning as the fire moved over the Philip Kgosana Drive.

"The family members of one minister and two deputy ministers were evacuated fro Walmer Estate properties,” she said.

De Lille said police have advised these families not to return to the houses due to heavy smoke and strong winds in the area.

“In Groote Schuur Estate, on Sunday, the fire had come close to the Deputy President’s residence but police worked with the firefighters and the fire was brought under control quickly in the area. There was no damage to this property,” she said.

Visiting the site of extensive damage at UCT, Premier Alan Winde, accompanied by Mayor Dan Plato thanked the firefighters and generous residents for their efforts.

“Thank you for your efforts to put a stop to the fire and help those in need. I further wish a speedy recovery to five firefighters who were injured in the line of duty.”

He called on police to leave no stone unturned in their investigations into the fires.

Gift of the Givers founder Imtiaz Sooliman said the organisation has been requested to provide three meals per day for the next seven days to evacuated students, a task he welcomed.