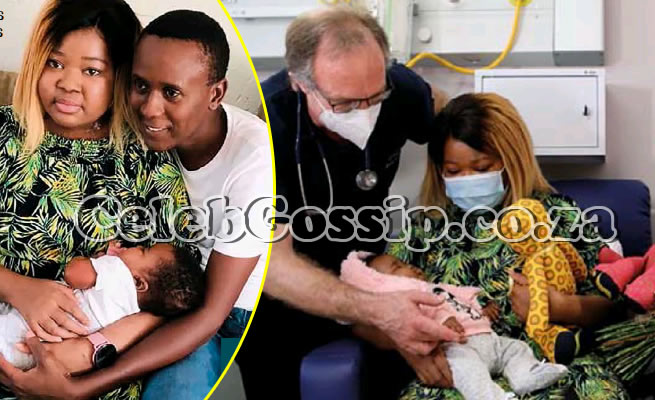 Mbali Mbatha is thrilled to be back home with her husband, Sizwe Mthiyane, and baby Kuhle.

THE last thing she remembered was how very cold it was when she was wheeled into the operating theatre for an emergency C-section. Next thing she woke up, confused and disoriented at being in a hospital room with a nurse trying to hand something to her.

Between those two moments, two months had passed. In that time Mbali Mbatha had given birth to a healthy baby girl – and made history as the first recipient of a Covid-19-related lung transplant. But Mbali (27) knew nothing about it until she was brought out of a medically induced coma in February.

She gave birth on 1 December and remembers how scared she was. “I felt so alone – my husband couldn’t be with me and I didn’t even get to see my baby,” she tells YOU. “I gave birth and passed out.”

Celebgossip.co.za understands that Mbali tested positive for Covid-19 and was admitted to hospital on 23 November last year because she was battling to breathe. She had no comorbidities and was a non-smoker and fit, but doctors were concerned about her ability to breathe properly. They advised her to have a C-section when she was 30 weeks into her pregnancy after she contracted pneumonia as a result of Covid-19.

“My obstetrician said they needed to prepare me for a C-section,” she says. If she went into labour while struggling to breathe, the risk would be too high for her and her baby, she was told. “I was scared for my baby’s life. I was given a minute to call my husband, then I was whisked into the operating theatre.”

Sizwe Mthiyane (37) feared for his wife and unborn child, and what was meant to be their first festive season preparing to be new parents became a nerve-racking nightmare for him.

“There was not a day that I did not visit my wife and child. Day in and day out I watched Mbali lying there, showing no sign of recovery. It was the worst festive season,” Sizwe says.

WHEN businessman and pastor Sizwe first laid eyes on Mbali in June 2016, he knew she was the one. Six months later the lovebirds, who live in Winchester Hills, Johannesburg, wed, and four years later they were thrilled when Mbali conceived.

When doctors told her their baby needed to be delivered, she called her husband. “Sizwe reassured me over the phone that it was important for them to get the baby out safely. But I was alone, scared and devastated,” she recalls.

Tears well up as she remembers that day. “It was so cold. The last thing I remember is giving birth to our baby girl before passing out. I really don’t like to think back to that traumatic time.”

After giving birth Mbali was transferred from Netcare Park Lane Hospital to Netcare Milpark Hospital, which offers specialised treatment for respiratory and cardiac issues. She was put on an artificial lung then put into a medically induced coma. “Mbali recovered from Covid-19 but her lungs did not recover,” explains pulmonologist Dr Paul Williams.

“One of the complications of the virus is that it sometimes damages the lungs extensively. In Mbali’s case the damage was irreversible. Her only chance of survival was to receive a donor lung.”

Meanwhile, healthy baby Kuhle, who’d been in the neonatal intensive care unit, was discharged from the hospital after 36 days and went home to be looked after by her dad and Mbali’s mom, Christine Mbatha.

Remarkably, one week after being placed on the donor waiting list there was a match for Mbali. Sizwe didn’t hesitate to give his consent for the transplant. “I was informed of a possible procedure that was going to take place, but the doctors couldn’t give any guarantees. “It was worth a shot,” he recalls.

“I still remember the first day I saw Mbali in that coma. I said to her, ‘You are the sickest person I have ever seen', but

Mbali’s mom, Christine, and Sizwe took care of Kuhle while Mbali was in hospital. She’s made history as the first recipient of a Covid-19-related lung transplant. you are also going to be the greatest miracle I have ever seen. We will walk out of this hospital together’.”

THE lung transplant operation wasn’t only a success, it was “a remarkable and miraculous situation”, says Dr Williams. “It’s so rare.”

It’s very unusual for recipients to be matched with donors within days, especially as there’s a shortage of organs for transplant.

Mbali’s op saw her become the first Covid-19 patient to become a donor lung recipient in Africa. Only about 100 such ops have been performed worldwide in the past year. And during lockdown many operations were put on hold to reduce the possibility of the coronavirus infecting patients.

Mbali remembers feeling extremely confused when she woke up. A nurse was next to her bed and she was given something to gargle with but she felt weak, which was frustrating for her.

Mbali was overcome with emotion when Sizwe told her about the transplant, knowing that if it hadn’t been for the donor she would have died.

“When I was told I’d been in a coma for two months and received a new lung I couldn’t believe it. I’m so grateful for the care I received from the medical staff and hospital staff.”

Mbali was discharged on 30 March and returned home to hold her baby girl for the first time, a feeling she says was “indescribable”.

Being immobile weakened her body and she’s had to relearn how to do even the simplest tasks.

“I had to learn everything from scratch, and sometimes it was discouraging because it’s simple things I was struggling to do for myself, like clothe my baby and carry her.

“Thankfully my mother and husband have been so helpful.”

Mbali has had physiotherapy to help her learn to breathe independently as she’s spent so much time breathing with the help of machines that her diaphragm has “forgotten” how to function normally, Sizwe explains.

The physiotherapy is also to help her regain control of simple body movements, like sitting up, getting out of bed, walking up stairs and running.

She’s relishing every moment of being a mom. “Being able to bond with my daughter and spend time with her is priceless. I don’t take it for granted.”

The couple urge people to take Covid-19 seriously. They don’t know how Mbali got the virus. Neither Sizwe nor any other relatives contracted it.

Dr Williams, meanwhile, is encouraging more people to become organ donors. “There’s a shortage of organs in South Africa and Covid-19 has only made it worse. The gift of donating your organs is truly priceless.”

Mbali will have to take medication to stop her body rejecting the organ.

“I’m forever a patient now and I’ll be taking medication for as long as I live.”

But it’s a small price to pay to see Kuhle grow up.