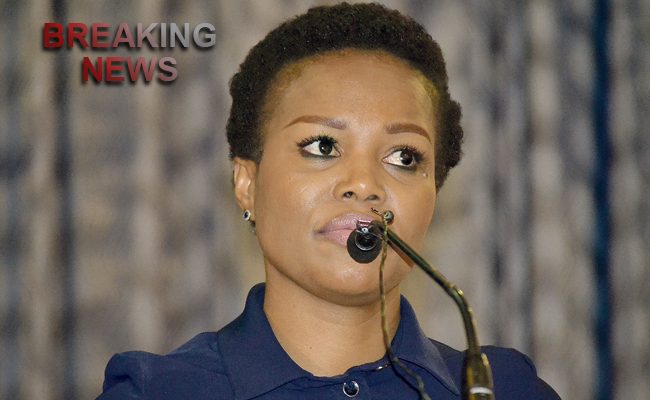 This, she claims, after she refused to comply with demands, apparently from her principals, who she referred to as "Masana Bishops", to attend late night meetings, choose who to greet, what to write on Facebook, which jamborees to attend and what her political views should be on the forthcoming Peter Mokaba regional conference.

But, other allegations are that she resigned after she was booed by delegates at the Limpopo ANC provincial conference last week, where she was defeated by Basikopo Makamu for the party's deputy provincial secretary post.

Moloi allegedly complained that Limpopo premier Stan Mathabatha, who was elected unopposed to retain his position as the ANC provincial chairperson, didn't protect her from the unruly delegates who jeered her.

After the conference, the flamboyant Moloi took to social media platforms and announced that she was resigning from her lucrative job because she "didn't join the ANC for blue lights".

Her actions irked her principals who called for disciplinary measures to be taken against her.

"Dear Masana Bishops. Don't worry, we will send our resignation letters and handover your so-called 'bluelights' by Friday to make your job easy. We didn't join the ANC for blue lights! Yours Onicca Moloi," she posted.

It is alleged that some politicians who were peeved at the post pleaded with her to delete it but, like a moth to a flame, she retorted with another spicy post a few days later.

"Hehehe. Thina we know our sins … we refused to be summoned to late meetings, we refused to be told what to write on Facebook, who to greet, which party to go to and what should be our views on the regional politics of Peter Mokaba ..

"But the question is why didn't they nominate them? Those who were part and parcel of the late night meetings. Those who were planning our downfall with them. Kera lena bo moratwa ba masana!!! Ke polotiki ntwe! You kill with a sword, you die with a sword! Kwaa!!," she wrote in her second missive

Mathabatha's spokesman in government Kenny Mathivha said he was unable to confirm wether or not Moloi had sent her letter of resignation to the premier.

"The premier has been away organising the funeral of the late MEC Joyce Mashamba and will only return to the office on Tuesday to process this matter. It must also be noted that MECs are not given letters of appointment as they are not employees but they are deployed. So they cannot send their letters of resignation to Masana Bishops on social media," he said.

Moloi's spokesman Moloko Moloto declined to comment and referred us back to Mathivha.

A PEC member, who didn't want to be named because he was not allowed to speak to the media, said Mathabatha was mulling over Moloi's resignation and would make a pronouncement soon.

"I confirmed from the inside [the premier's office] that she has resigned but he has not accepted it," said the politician.

Three government officials, who also didn't want to be named, confirmed Moloi's resignation and said her private office employees were worried about their future.