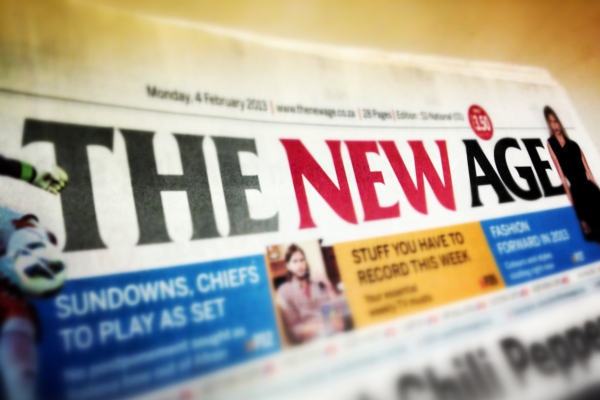 AfroVoice newspaper, formerly The New Age, shuts down abruptly. The newspaper will very shortly no longer be on our shelves, as management announced it will be closing without notice.

It has been confirmed that the AfroVoice newspaper owned by Mzwanele Manyi will shortly stop printing.

Manyi took over the title from the controversial Gupta family and rebranded it from its original name, The New Age. The paper’s first edition appeared on 6 December 2010 and appeared daily, Monday to Friday.

Vuyo Mvoko was the newspaper’s first editor, but he and five senior staff members resigned on 19 October 2010, the day before the first edition’s publication. The second editor, Henry Jeffreys, was appointed on 1 December 2010 and left the paper again in May 2011. He was immediately replaced by Ryland Fisher, who in turn was replaced in August 2012 by the current editor Moegsien Williams.

The newspaper was always controversial, pushing a pro-ANC agenda favourable to long-time friend of the Guptas former president Jacob Zuma and relying primarily on government advertising and sponsorship to survive. Since Cyril Ramaphosa took over as president from Zuma the survival of the paper was always in doubt.

He made only cosmetic changes to both brands.

Following Ramaphosa’s ascension to power, MultiChoice announced it would not be renewing ANN7’s contract, a decision Manyi has hoped to reverse, partly through the rebranding.

It has been reported that staff members were told in a meeting on Thursday afternoon that they should not to come to work in July because the paper was closing.

“Staff will get paid for July even though they will not be working,” one reporter has tweeted.

The news was confirmed at the paper’s regional offices too.