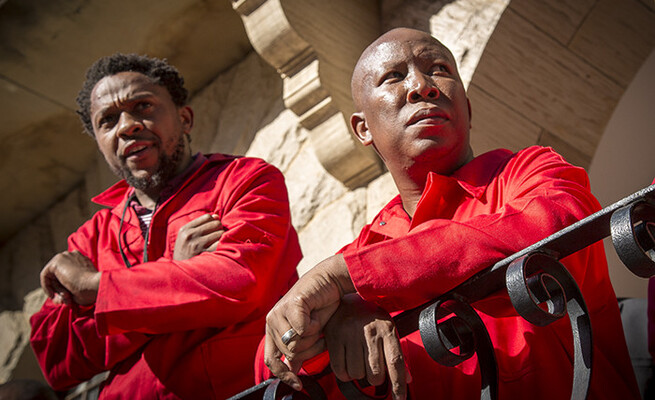 The party laid a criminal complaint against the EFF for inciting public violence, malicious damage to property, and intimidation.

The Democratic Alliance (DA) on Monday said that it wanted Economic Freedom Fighters (EFF) leader Julius Malema and all the party’s members who were attacking Clicks stores to be arrested for their violent demonstrations.

The party laid a criminal complaint against the EFF for inciting public violence, malicious damage to property, and intimidation.

Clicks said that 425 stores came under attack on Monday, with an attempt to petrol bomb a branch in Emalahleni, Mpumalanga, and the defacing of the store at the Lemon Tree Shopping Centre in Alberton.

The red berets want Clicks to fire the company and staff behind their TRESemmé ad and demanded that all outlets shut their doors until Friday.

But the DA’s spokesperson on police, Andrew Whitfield, said that the behaviour was political thuggery.

"This is not the first time that Julius Malema and his quasi-revolutionaries have called for violence and the destruction of property in the name of justice.

"The EFF’s call to violence and destruction of property will affect the livelihoods of thousands of Clicks employees who will bear the brunt of this destruction," Whitfield said in a statement.

He added: "This is especially concerning given the tumultuous economic situation most people are facing after the easing of the COVID-19 lockdown. The destruction of stores will only mean that South Africans who have already been left vulnerable due to the lockdown will be put under further financial strain should they lose their jobs if these shops have to be closed permanently."