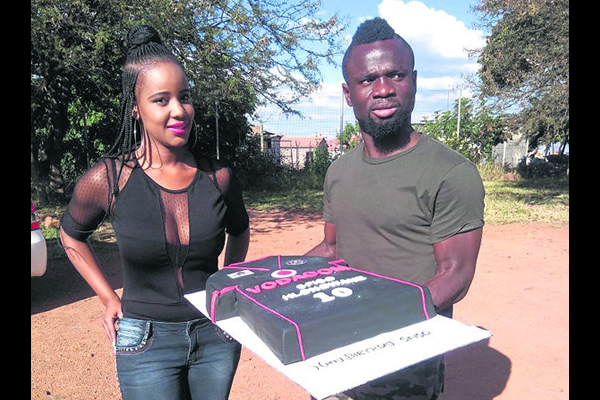 Not only did Katlego arrange a special cake for her friend, she even took soccer star Bernard Morrison with her to surprise him. But Katlego was the one who got the real surprise – when both she and Bernard were allegedly insulted.

Katlego and Bernard left humiliated and offended. The cake remained uneaten! Katlego Jiyane (22) arrived at her friend Sfiso Hlongwane’s workplace on his birthday. She knew he was a big Pirates’ soccer fan and she had organised a cake in the shape of a Bucs’ jersey.

And the biggest surprise of all was that Katlego had gone to a lot of trouble to convince Orlando Pirates soccer player Bernard Morrison to be on hand to hand over the cake.

But what Katlego from extension 13 in Soshanguve, Tshwane had planned and what happened was not nearly the same thing. She got a nasty surprise when Sfiso’s female colleague allegedly called her names and chased them away.

“She told me I was a bitch and that I was after her man. I have never seen this woman before and Sfiso is just a friend,” said Katlego.

She said all she wanted to do was to express her love for her friend.

“I wanted to see Sfiso happy. I didn’t expect to be called names and to be embarrassed in front of Bernard.”

Katlego said the woman deserved to be in jail.

“She treated me like a prostitute. I was insulted and for that she deserves to pay,” she said.

When Daily Sun spoke to Sfiso, he said he couldn’t comment.

“I’m not supposed to comment because Katlego has lodged a complaint against me and my superiors. She wasn’t attacked,” he said.

“I agreed as my wife begged me and said it was for a good cause. We were supposed to leave for Ghana that week but postponed our flight to make her dream a reality. I felt bad because I got bad treatment. Some people have no respect. I have no regret for helping Katlego,” he said.

“No arrests have been made yet and the police are investigating.”