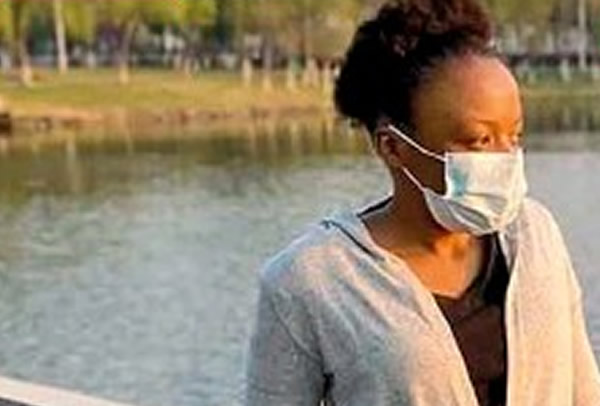 The situation of having to spend most of the day, if not days indoors has made Jessica Rakole value freedom so much, she managed to see the Jingzhou, outside world for the first time in 56 days, only recently.

All the way from Limpopo, to China for studying purposes, but after the outbreak of coronavirus she wouldn't mind abandoning her certificates and diplomas.

She was now longing to return home, however, as for now, she can't.

Life got fearful for her after having spent 2 months locked in China. All the 22-year-old medical student wanted now was to see her family once again – she wouldn't mind even if she were to be isolated in a Polokwane hotel for 14 days.

However, her hopes to be home were put off just an hour before she was to take a flight along with more than 100 fellow South Africans. In March 2020 she was scheduled to be brought home aboard a South African Airways rescue aircraft, but that was not to be.

This came after initial clinical tests had indicated that she and three other South Africans had fevers – one of the key symptoms of Covid-19, and as such she was blocked from travelling back home.

She was disappointed and to make matters worse the medical tests later revealed that she had no coronavirus.

It was a dream come true for her being able to go and study abroad, after hailing from humble beginnings.

While still in South Africa, Jessica was staying with her mother, Portia Tshilidzi, a teacher, her stepdad, Johannes, and younger brother, Justin (13), in the little Limpopo village of Mulima.

She was motivated to study medicine by an American film Gifted Hands. Her hero in the movie was Ben Carson who saved lives. “After I watched the film, I thought, ‘Wow! I can actually do something great with my life. I can save people’,” she said.

She failed to get a place at a local university to study medicine and had to search abroad. She finally secured a place at Yangtze University in the town of Jingzhou, a place which was very close to Wuhan, the capital of China’s Hubei province from which the disease began.

Moving away from home, especially abroad for the first time frightened her. “It was my first time out of South Africa and it was all too much for me to take in. The food here is very different – they have vegetables I didn’t even know existed,” she said.

Just a few days the university was in lockdown. At that time there were more than 1 500 reported cases of Covid-19 infections in Jingzhou alone. It left her in fear. “I knew this thing was really serious. It scared me,” she said.

The university was safe but it was a bit crowded as students are accommodated in two-bedroom apartments. Jessica stayed with two other students, one from Ghana and the other from the Comoros.

What made her feel out of place was that both her roommates left for their countries before the lockdown.

“At first I was happy – I had all the space and room to myself. But as the weeks went by, it started becoming very depressing. The school tried to provide counselling. We formed a group on WeChat but I couldn’t shake the feeling that I was alone in this whole fiasco,” she said.

Between the online classes and her spare time, Jessica remained holed up in her room, as she was allowed out of her rooms only two times a day to collect her lunch and supper from the canteen.

It came as a surprise for her when SA’s Department of International Relations and Cooperation contacted her via email asking her if she wanted to come home, she was happy and accepted the opportunity.

However, as fate may have it, when she was now feeling the relief of being able to go back home, news sailed through that the number of Covid-19 cases in SA had risen to 16. This left her in a state of confusion and undecided.

“I started wondering if I should come back. If it’s in SA, is it even worth it for me to halt my studies and return?” She said.

Home is the best- she thought finally, she was determined to return and when a driver arrived to take her to the airport in Wuhan to catch a rescue flight, she was more than ready with her mask and baggage.

She was taken to a hospital which was close to her place to get tested for possible Covid-19 symptoms and to get a medical clearance certificate before she’d be allowed to fly out of Jingzhou.

It was the first test which stopped her from coming back home, as it showed she had a marginally higher temperature of 37,5ºC (normal body temperature is 37ºC).

“I thought, ‘Oh my god, am I sick?” she wondered. She was informed that she wouldn’t be allowed on the plane if she was showing signs of fever. It only came out later that she was fine.

“I believe in the coming weeks things will be fine here. But adapting to life post-Covid-19 has been a bit weird. I just haven’t grown used to the fact that the lockdown is officially over here in my city. Most of the students are staying in their rooms – I think we’re still a bit anxious. It’ll take time,” she said.

Things began getting normal after the lockdown with shops now opening.

“My friends told me malls are opening up too, but as you get in, they’re still checking people’s temperature. I also saw taxis from my window, so they’re also operating now,” she said.

As for the lockdown in SA, she’s feeling optimistic about the government’s efforts to stop the spread of the virus.

“It’s horrible. I wouldn’t want South Africa to go through what we did but it’s comforting that the government is taking it seriously,” said Jessica, who’s hoping to complete her medical internship in SA after finishing her studies in China.

“I know it’s a scary thing, that fear of not knowing what to expect,” she said. “But have faith that it will end and things will go back to the way they were.”