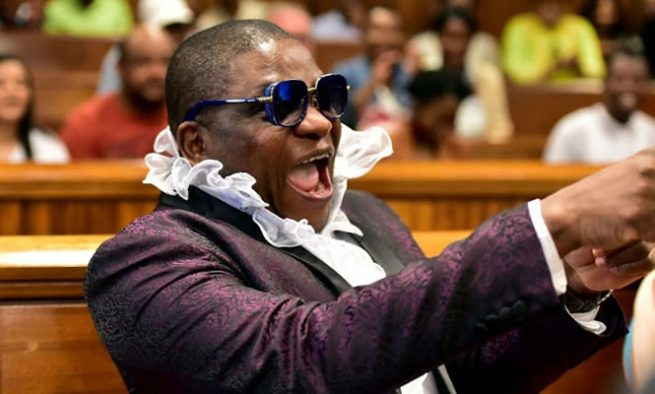 After his arrest, rape accused pastor Timothy Omotoso instructed the young women living in his Durban mission house to pray for him and direct prayers against his enemies, including a magistrate and a prosecutor.

Testifying for the second day in the Omotoso trial in the Port Elizabeth High Court, state witness Andisiwe Dike, 30, said following Omotoso’s April 2017 arrest, he would call the women at the mission house regularly and speak to them on a speakerphone.

According to Dike, Omotoso had a number of prayer books which contained prayers for different occasions and, after his arrest, he encouraged the women to use them against his enemies.


One such prayer included the passage “may the ground open up a nd swallow them… and cause confusion in the court”, Dike said.

In the weeks following Omotoso’s arrest, Dike and a number of other women remained at the Ridge Road, La Lucia property in Durban until the property was sold.

Three weeks after his arrest and when the food in the house ran out, Omotoso’s wife, Taiwo, allegedly went to the house and gave one of the women money to buy groceries.

According to Dike, in the lead up to his arrest, Omotoso had become more arrogant in his behaviour and in the manner in which he addressed his congregants.

At one stage, Omotoso allegedly told parents in the congregation that if they thought he was sleeping with their children, he did not care if they took the allegations to CNN.

On Monday, the trio pleaded not guilty. Earlier in her testimony, Dike said she was afraid of not returning to the mission house after she went to visit her mother in East London because she feared Omotoso would put a curse on her.

After leaving the mission house, Dike said she developed a serious drinking problem and suffered from depression.

She eventually went to a rehabilitation centre in East London and had gone for psychological counselling. The defence attorney for Omotoso and his co-accused is expected to cross-examine Dike today.

One woman who accuses Omotoso of raping her is Cheryl Zondi. Two years ago a man tried to sell Cheryl's sex tape to Pastor Omotoso for R3 million.

The willing seller threatened to sell the alleged sex tape to Pastor Timothy Omotoso, the man who is accused of sexually abusing her. The tape supposedly shows that she was not the person she portrays in public.

“We know that if we had not gone to the High Court for the interdict, we would be in a different situation right now,” said Thoko Mkhwanazi-Xaluva, deputy chairwoman of the Cheryl Zondi Foundation, during a TV interview.

“A whistle blower warned us that this threat exists. This person said she has seen the footage and that the owner of the tape wants to sell it for R3 million, but he would accept R1,5 million.”

Zondi, who expressed her dissatisfaction in the witness protection unit’s abilities, is guarded by 24-hour security because of the threats said to come from Omotoso’s followers.

Mkhwanazi-Xaluva said a trusted source had warned them that a hit was planned against Zondi.

In the same year, there was a serious debate in court over Pastor Omotoso's penis size. Defence Advocate Terry Price then argued that Peter Daubermann’s question about how much of Pastor Timothy Omotoso’s penis size, in terms of centimetres penetrated, was necessary.

Price told the court that the question might have not been asked in right way, but it needed to be asked.