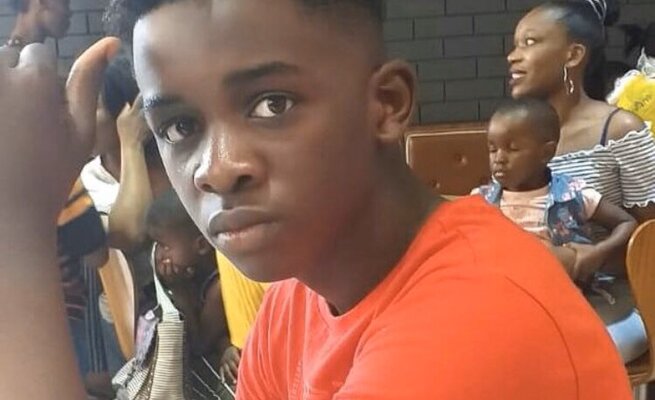 IT SHOULD have been the start of a bright new chapter – their youngest child off to a prestigious school where he’d grow and thrive, building the foundation for a promising future. But for Enoch Mpianzi, it was over before it even began.

The tragic circumstances surrounding the death of the 13-year-old Parktown Boys’ High School learner have united South Africans in horror and outrage.


How could the school only have realised he was missing the next day? How could the organisers allow a young boy without a life jacket on to a makeshift raft in a river swollen by rain?

The topic dominated social media and radio talk shows – but for one family, the furore only added to their grief. A dark cloud hangs over the home in Malvern, Johannesburg, where the Mpianzi family live – and where Enoch will never return.

His mom, Anto (45), is taking the tragedy especially hard. Her last-born was her be-all and end-all, she says. She even nicknamed him her “handbag” because they went everywhere together.

“He was my everything,” she says. “I had such high hopes for him – I wanted to see him grow up and fulfil all his dreams. He wanted to be a lawyer. Enoch was my best friend,” the heartbroken woman adds.

ANTO and her husband, Guy Intamba Ekila, moved to SA from the Democratic Republic of Congo in 2001, fleeing the turmoil of their homeland. They set about carving a living for themselves in Joburg – Anto by selling Congolese food, Guy by buying and reselling cars.

They didn’t have much but it was enough to feed and clothe their sons, Yves (25), Sharack (21), Mordecai (18) and young Enoch. When the time came for Enoch to go to high school, his parents applied for fee exemption at Parktown Boys’ High.

The school year was to start with the Grade 8 boys going on an orientation camp to Nyati Bush and Riverbreak near Brits in the North West, and Enoch was so excited he could barely sleep the night before. The camp would include a hike and a river-rafting challenge. According to news reports, the children had to take their own life jackets but the Mpianzis couldn’t afford one for Enoch.

Apart from that, however, he was ready for the camp.

“I personally packed his bags and made sure he had everything he needed according to the list from the school,” Anto says, speaking via her French interpreter, her niece Debora Kodiemoka (21).

The family had managed to raise the R870 for the camp but because they were late with the fee payment, they rushed to show the school secretary the proof of payment shortly before the bus was due to leave.

“Everything was set and he was good to go,” Anto says. Enoch didn’t know any of the other boys and he was shy, she adds, but he made two friends that morning.

As she went to hug him goodbye she realised he hadn’t put deodorant on so she took her can from her bag and sprayed him.

“My husband accompanied him onto the bus and we waved goodbye.” At 10am on Wednesday 15 January the bus left the school grounds – and it would be the last time they would see their son alive.

THE next day Guy received a call from the school’s secretary asking if his son had indeed gone on camp. “When I told her yes, he did, she said okay, I would get a call if there was a problem. Just before 4pm I got another call, this time from the principal. He told me they couldn’t find my son but they were searching for him.”

The worried family made their way to the school and found most offices locked. Anto phoned the headmaster, Malcolm Williams, who told them he had arranged transport to take them to the campsite.

He added Enoch was last seen at lunch, before an 8km hike in the woods. When they arrived at the campsite after 8pm nothing seemed amiss, the family recalls. “There was no panic – it didn’t seem like there was an emergency,” Anto says.

“Everyone was calm while we were losing our minds. But death never crossed my mind – I thought Enoch must have wandered off during the hike and lost his way. I was convinced we’d look for him and find him and all would be well.”

The family were offered supper and a dormitory in which to spend the night and told to meet the school counsellor, campsite staff and police at 7.30am the

next morning when the search would be resumed.

“We were a group of nine family members and we were up and ready before 7.30am,” Anto says.

Police divers slid into the water while the family and other searchers walked the banks of the Crocodile River, running fast after recent rains, screaming Enoch’s name.

“We kept hoping he would emerge from the bushes,” Anto says.

Hours later they returned to the campsite where Panyaza Lesufi, the Gauteng MEC for education, was waiting.

“He introduced himself and told us sniffer dogs were being organised,” Anto says.

“He told us to stay put. After about an hour he came back and told us we needed to be strong – they had found something. We asked, ‘Something like what?’ and he said, ‘A child’s body’.”

A distraught Anto was eventually allowed to identify her child’s body. “He was covered in a white plastic sheet and the body was on top of a raft.

“His stomach was flat, his mouth was closed and he had a lot of blood on his face. I don’t know much about drowning but from what I’ve heard, a person who drowned has a bloated stomach. I also didn’t understand where the blood was coming from.”

The family is appealing to other Grade 8 boys to come forward to tell them what happened that day. Did their boy disappear during the rafting exercise? Did he get lost during the hike?

After the tragedy the school released a statement saying the headmaster, seven teachers, a “child development and protection consultant”, the head boy and deputy head boy were all at the camp.

“Late on Thursday morning, it became apparent that a boy had gone missing from the camp. The headmaster contacted the father to alert him to staff concerns,” the statement says

The police had already been called, the statement adds, and by 11am on Friday “the school was informed of the tragic news that the body of Enoch Mpianzi had been found”.

The school, police and education department have all launched investigations and the SA Human Rights Commission (SAHRC) will represent the family, the SAHRC’s Gauteng head Buang Jones said.

Anton Knoetze, managing director of the lodge where the activity took place, has been too distraught to comment.