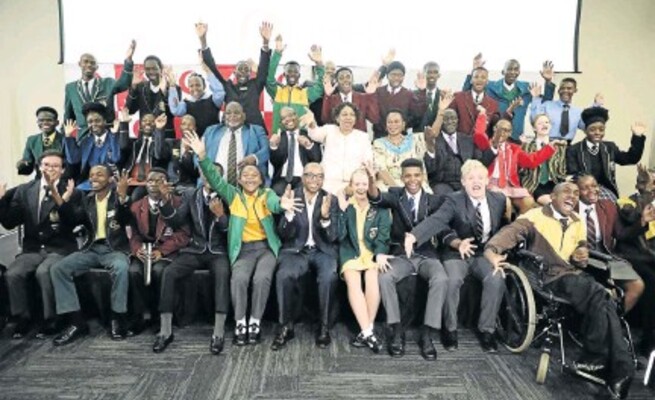 Tiyani Mbendzani was engaged in prayer when he received a call that he had been invited for breakfast with basic education minister Angie Motshekga as one of the 2019 matric class top achievers.

Mbendzani, 19, a grade 12 pupil at Rivoni School for the Blind in Limpopo, was one of the 33 matric top achievers who met Motshekga in Midrand yesterday ahead of the official announcement of matric results.

Mbendzani said he was over the moon to be among the country’s best matric performers.

“I was in an all-night prayer when my brother excitedly came to me with my phone. He told me that I was invited by the minister for her meetand-greet breakfast. I was extremely happy and I thanked God for his unconditional love,” he said.

Mbendzani had initially struggled to adapt to life after completely losing his eyesight when he was doing grade 5.

“I was firstly affected by the cataract and I would sit in front of the chalkboard. Other kids used to call me names, but I was not bothered because I knew I had better plans for my future. As the time passed, I completely lost my eyesight and had to drop out of the normal school to enrol in a school for the blind,” Mbendzani said.

He said it took him six months to fully adapt to his new situation and he chose not to feel sorry for himself.

“My family was very supportive and I had no time to feel sorry for myself,” he said.

Mbendzani plans to study for an LLB at the University of Johannesburg.

“I was excited and nervous at the same time because I have seen how the planes would fall in movies.

“So many things ran in my mind, but I was happy my mother was accompanying me,” he said.

Nogemane plans to study mechanical engineering at the University of Johannesburg this year.