WHILE Gauteng residents enjoyed the rain over the weekend, some Mpumalanga residents experienced a different kind of rain.

It rained money in Nkomazi on Saturday. And the person behind this is a man identified as Zakhele “Mbhunu”.

In a video doing the rounds on social media, Zakhele is seen throwing money into the crowd during an ANC event, while former ANC Ehlanzeni chairman Ngrayi Ngwenya watches. 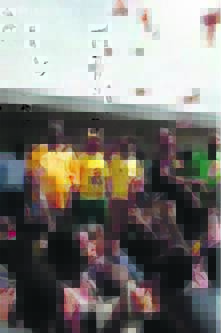 One of the people who caught some of the notes, Nkululeko Sibiya, said they were disappointed by what happened.

“We have a problem of water in Nkomazi. This money could have been used to address this challenge,” she said.

Zakhele is said to provide protection services to Ngwenya and also owns a security company, which operates around Nkomazi.

Sedibe said what Zakhele did was uncalled for.

“No one works hard to get money and throws it like that. That man must be investigated,” he said.

He said the person who threw the money was a businessman and not an ANC member.