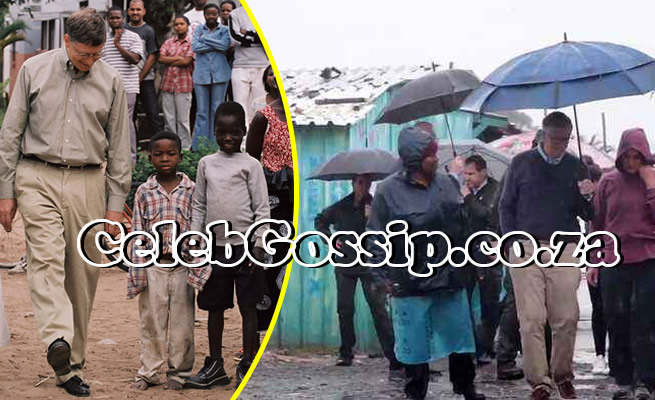 Bill Gates – who may be on the verge of becoming the world’s richest person again – visited Khayelitsha in Cape Town on Friday.

With his wife Melinda, they braced the rain to visit Inkanini Primary School, a new state school that opened in the Zwelitsha informal settlement in Khayelitsha last year, Gallo reported. The school has some 560 learners.

The Gates couple then visited a creche in the Site B Informal Settlement.

Through the Gates Foundation, Bill Gates has invested large amounts in South Africa. The foundation identified South Africa as one of the ten countries where it believes it can have the greatest impact.

It has invested in more than 100 South African organisations which are focused on discovering new medicines for HIV and TB, as well as treating and preventing those illnesses. Some of these organisations are also involved in agriculture, water sanitation, and hygiene.

Gates’ visit to South Africa could coincide with his becoming the world’s richest person again. Bloomberg reports that he looks set to reclaim that title from Amazon CEO Jeff Bezos, whose fortunes are closely tied to the Amazon share price. Amazon has been under pressure this week, ahead of a profit update late on Thursday.

Bezos has been the world’s richest for the past two years, but a rally in Microsoft’s share price and the Amazon founder’s divorce settlement have contributed to a potential shift.

"Gates, on the other hand, may have never relinquished the top spot were it not for his philanthropy. He has donated more than $35 billion to the Bill & Melinda Gates Foundation since 1994," Bloomberg reported.