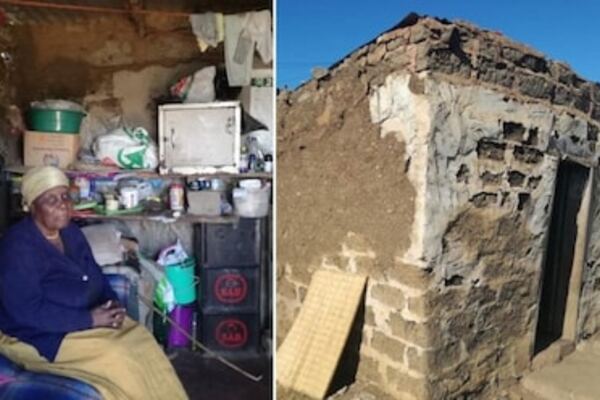 South Africans have come together to show support for a gogo whose poor living conditions went viral last week.

When South Africans decided to help someone, nobody can stand in their way. Even after the "caring government" of KwaZulu-Natal announced it would build 89-year-old Gogo Nxumalo a new house, Mzansi still went ahead with a crowdfunding campaign for the elderly lady.

Thus far, the crowdfunding campaign managed to raise R79 344.89 since it was launched a couple of days ago.

The target amount to raise is set at R250 000 and the donations are still streaming in. The campaign was started by 25-year-old Themba Rumbu, who lives in Fort Beaufort, however, he studies in Bloemfontein at UFS.

"I was made aware of Gogo Nxumalo from Bucanana Ward 33 eMhlathuze in KZN, through my social media account. I have a large following and I use my following to assist my fellow South Africans with difficulties that they are facing. My love for helping others sparked when I realized what my following can do," Rumbu wrote.

Fuck the govement …. send me her details and I will help! (Or someone who knows her)Sick and tired of this bullshit! Let’s get our hands dirty and stop pointing fingers! https://t.co/v3Byx5nT4Z

Mzansi was left fuming and social media users called on Ramaphosa to help the gogo.