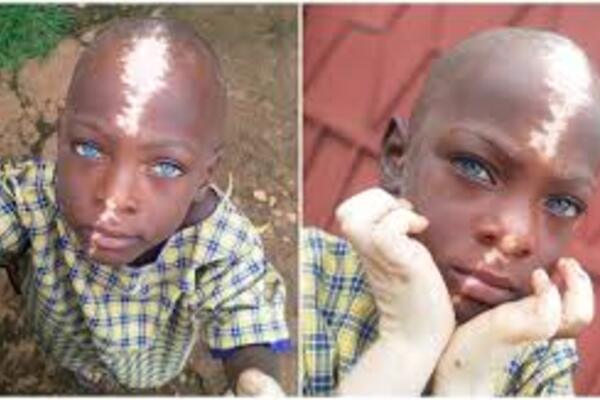 Twitter user @faray_official warmed the hearts of many after sharing photos of the young boy with his breathtaking facial features.

The kid suffers from a skin disorder known as vitiligo, a condition in which white patches are formed on different parts of the body due to the lack of a skin pigment called melanin. However, even more interesting about the youngster is the fact that a white patch formed on his forehead which gives him a close resemblance to popular movie/cartoon characters in Avatar. This is coupled with his distinctive blue-coloured pupils.

Look at the eyes of this kid. So Beautiful
He deserves plenty of Retweets 😍😍 pic.twitter.com/iSY8jD6Vab

Social media users could not help themselves from gushing over the little one. See some reactions below:

He has Vitiligo…no melanin in parts of his skin. Such a beautiful boy😍

Damn I know this kid 😂😂
In bunga this boy bumps into me and my niggaz blazing 🔥.. in my high I tell these boys look at an angel🥰😍😘😍😍 I was both terrified and amazed at the same time coz he had the most beautiful eyes I had ever seen.True story

In the comment section however, it was further disclosed that the young boy is from Uganda and unfortunately lacks the ability to speak.